Royal College of Art student June Tong has proposed creating an Arctic thermal bath, which would be powered by cruise ship waste, in a bid to spotlight the industry's environmental impact.

The proposal, named In Murky Waters, was designed to draw attention to the increasing number of "parasitic and destructive" cruise ships capitalising on the increasingly ice-free Arctic Sea.

In Murky Waters envisions a bathhouse in a small Arctic settlement, which would be powered by waste that cruise ships deposit on arrival.

However, the spa facility is designed with limited access to ensure there is not enough space for the thousands of people onboard, in a bid to promote Arctic exploration through the more sustainable model of long-stay tourism.

"Every day, an average-sized cruise ship of 3,000 guests is predicted to release 25,000 gallons of sewage, 143,000 gallons of greywater, seven tonnes of garbage and solid waste, 15 gallons of toxic chemicals and 7,000 gallons of oily bilge water," Tong told Dezeen.

"It is foreseeable that in the future, a significant re-evaluation in the attitude towards the whole industry of cruise tourism will be necessary, if the arctic environment is to be salvaged from further anthropogenic deterioration," she continued.

"The proposal creates a retaliatory exploitation of the cruise ship, preventing increasing dependency and a resultant dictatorship of the cruise industry over the economic future of the towns."

Tong developed the proposal as part of her final-year project for ADS3 at The Royal College of Art in London, which is led by Daniel Fernández Pascual and Alon Schwabe.

Students on the programme examined "global processes around the extraction of value, erosion of democracy and creation of profit margins, with a focus upon the preservation of ocean space and the architecture of the water systems and eco-political structures that conform it". 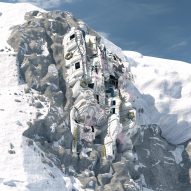 In Murky Waters focuses specifically on Longyearbyen, a small coal-mining town in Norway's Svalbard archipelago. In recent years, the town has become increasingly reliant on Arctic cruises for money due to a falling demand for coal-powered energy.

However, it is under strain due to a lack of infrastructure available to cope with the waste left by the ships.

Tong's masterplan for the town therefore proposes the town use cruise-ship waste as an abundant source of free power.

"The new masterplan for Longyearbyen proposes an energy strategy where waste will become a commodity – offsetting the declining production of coal-powered energy, whilst simultaneously exploiting the vast volumes of deposited cruise waste as a new, free and abundant source of power for the town," she explained.

Energy generated from waste incineration is transported across the town to households, but also to an existing overground infrastructure into an abandoned coal cableway centre.

The centre will be transformed into the thermal baths, a tourist attraction containing two outdoor pools, two steam rooms, two saunas, and a room for hot stone massages.

Guests will be invited to experience the arctic bathing "guided through their output of waste", shining a light on the vast quantities of waste produced by cruise ships that is usually hidden from guests. 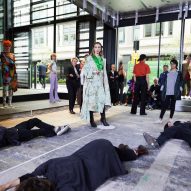 "The situation in Longyearbyen is an example of just one Arctic community, but the popularisation of cruise tourism to isolated settlements is a movement which will happen increasingly across the Arctic as ice melts," concluded Tong.

Other recent graduate projects by students at the Royal College of Art include fashion student Laura Kraup Frandsen's graduate show that was used as a protest against the climate crisis.