Block9 co-founders Gideon Berger and Steven Gallagher explain how they built the monolithic IICON stage at Glastonbury in this exclusive video shot by Dezeen at the famous music festival.

The focal point of the structure is an enormous diagonally-tilted head with a cubical volume inset where its facial features should appear.

"It takes the form of a huge anonymous head with a very large cube intersecting the face" explained Block9 co-founder Gallagher in the movie. "The cube looks a bit like a visor."

After the sun set over Glastonbury each night, IICON came to life as DJs and musicians playing experimental electronic music took to its stage to entertain up to 15,000 revellers at once.

Looming over the stage is a huge LED screen that appears in place of the face's eyes.

The visuals on the screen were animated by Block9's technical team. These were complimented with projection mapping across the surface of the stage structure, as well as lighting design.

"The whole thing is video-mapped, so we are able to animate the surface of the head," explained Gallagher.

As lasers and beams of light swung over the crowd, three-dimensional video mapping created an array of psychedelic effects.

"We have bespoke three-dimensional video content that makes it look like things are sort of growing over the surface, really responding to the shape," said Gallagher.

Block9 is best known for its activities at Glastonbury, where it has created immersive themed stages in the festival's nightlife-focussed South East corner for eleven successive instalments of the festival.

"We've been working for the past 11 years as a partnership building temporary alternative realities," explained fellow co-founder Berger, who also DJs under the name Gideön.

According to its designers, IICON represents a new scale of project for Block9.

"It's on a giant scaffolding substructure with many tonnes of concrete ballast underneath. Then there's a giant truss which houses the visor, this big architectural monolith."

While IICON was the scene of a raucous party at Glastonbury, Berger insists that the project has a socio-political message to convey alongside the revelry.

"It's a pseudo-religious monument to the situation that humankind finds itself in today," he explained. "The fact that we are heading in some pretty dangerous and scary directions politically and environmentally, and we are just staring at our screens and pressing 'more' or 'like' or 'buy.'"

Block9 stated that IICON's debut at Glastonbury was only the first leg of the project, as the studio has plans to launch it as a touring venue with an evolved interior space.

"The intention was always for it to be able to go to different cities around the world," Gallagher said. "What we have here at Glastonbury is chapter one - chapter two will be an interior venue. It will feel like going inside the artwork, going into the music." 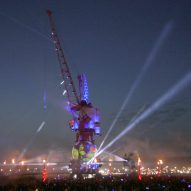 Architecture and design highlights from Glastonbury 2019

IICON occupies Block9's site at Glastonbury alongside two other venues which have returned to the festival in successive years - Genosys and the NYC Downlow.

Genosys is a towering post-industrial structure that features vitrines filled with real plants high above a DJ booth.

The NYC Downlow is an infamous temporary gay club, which kick-started Block9's activities at Glastonbury. The facade, which recreates a building from New York's meatpacking district in the early 1980s, houses a packed nightclub that hosts disco and house DJs alongside drag queen performances.

According to Berger, each of the venues offer visitors a multifaceted and engaging experience of underground dance music culture.

"What we do with all of our projects is combine loads of different disciplines into a temporary alternative reality" he claimed. "The experience is deep, and we are doing everything in our power to facilitate that depth."

Glastonbury is one of the world's largest music festivals, which this year took place from 26 to 30 June in Somerset, UK.

Dezeen created a video roundup of the architectural and design highlights at last week's Glastonbury festival, which becomes equivalent in terms of size to a small city populated by 200,000 citizens during its duration.

Stormzy made headlines this year with a spectacular headline show, in which he wore a stab-proof vest emblazoned with the British flag and designed by Banksy.

This movie was shot by Dezeen at Glastonbury. The music used in the video is Shiratani by Batu.