Named Manipulating Mont Blanc, Bradford-Smith's proposal imagines a future where humans will inhabit the red planet. It is intended to push astronauts "close to the limit of survival" to help them prepare for life in a martian colony.

The steel structure would be precariously-placed on the face of Mont Blanc, the Alps' highest mountain, and imitate Mars' physical environment for four astronauts living and working there for a month.

"There is no doubt that astronauts will require training and preparation to withstand Martian environmental conditions if a future colonisation of Mars is to be a success," Bradford-Smith told Dezeen.

"Manipulating Mont Blanc proposes a training facility offering the The European Space Agency (ESA) to prepare a clearer insight into how astronauts acclimatise and adapt to the environmental and psychological challenges of Mars."

Bradford-Smith developed the proposal as his final-year project for Unit 11 at The Bartlett School of Architecture in London, which is led by Mark Smout and Laura Allen.

Students on the programme were asked to look "at the last uncharted regions of our universe or to search more metaphorically, looking at scientific discovery, where exploration is a continually moving boundary".

"Located close to the summit of Mont Blanc and within a valley 1,000 metres above sea level near the French-Swiss border the building aims to passively simulate Martian conditions within the Alps," he explained.

"In this way, the proposed architecture uses one accessible extreme environment to recreate another."

Manipulating Mont Blanc builds on the ESA's existing altitude cabins that are found throughout the Mont Blanc Massif mountain range.

The region is chosen for its isolation, exposure to high winds speeds, low air pressure and fluctuations in temperature that resembles Mars' extreme environment, allowing the space agency to examine how people cope in these conditions. 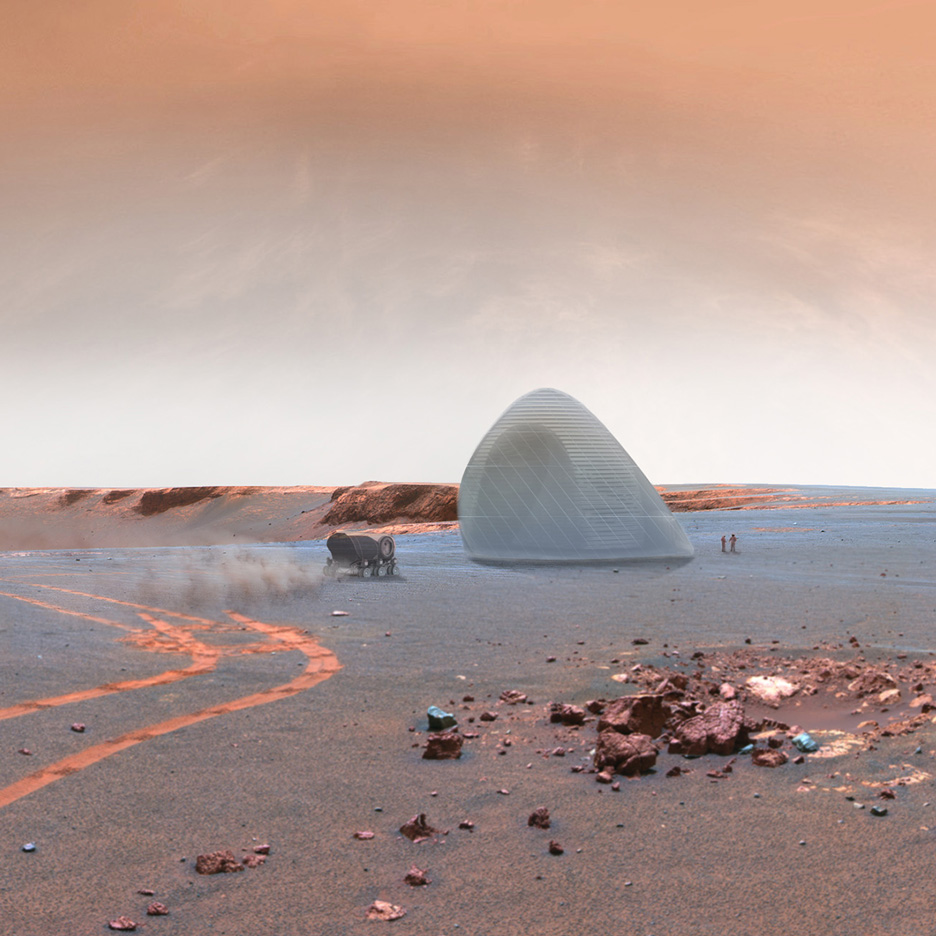 Bradford-Smith's scheme is intended to offer the ESA an improved understanding, and centres around a series of "passive simulations spaces" that seek to emulate Mars' light quality, sounds or extreme temperatures more accurately.

These spaces plug into the facility's vertical steel structure, creating an uneven rock-like facade around which the astronauts must climb in and out to conduct their daily tasks.

While helping the building to blend in to the mountain face, this jagged shell also creates a challenging terrain for the astronauts to manoeuvre and navigate, so that the ESA can monitor and assess their psychological stress.

Inside, the light simulation rooms are filled with hard shadows and blue and violet lighting that mimics the effects the planet's thin atmosphere, while some spaces evoke butterscotch-coloured of martian dust storms.

Meanwhile, the temperature simulation rooms use wind tunnels to echo the planet's freezing temperatures that result from its low air density, and the sound simulation spaces reproduce the low rumbles of wind heard across Mars. Another room eradicates external noise completely to recreate the silence on the planet when wind speeds drop.

The Manipulating Mont Blanc training facility is complete with a greenhouse, geology and biology laboratories, engineer, land surveyor and prospectors offices, alongside sleeping and relaxation spaces, and a living area and kitchen.

In 2017, Central Saint Martins graduate Christine Lew also imagined a future where humans inhabit Mars, creating a series of objects for the more overlooked aspects of space colonisation like a bathing suit, a vacuum-suctioning dressing gown and a temperature-regulating duvet.