Visitors to the office of Scotland's first minister can peruse a curated collection of design and craft objects aimed at raising the profile of the Scottish design industry.

As part of a recent refurbishment of first minister Nicola Sturgeon's office at the Scottish Parliament Building in Edinburgh, curator Stacey Hunter suggested including a series of functional and decorative objects to represent the best of Scottish design.

These are supplemented by five loaned pieces that will be rotated every six months.

Hunter, who founded curatorial agency Local Heroes that gives the collection its name in 2015 to promote the work of designers based in Scotland, proposed the idea as a way of celebrating local talent in a high-powered setting.

"I think that having a showcase of Scottish design in a space as powerful as the First Minister's office is emblematic of how energetic and essential the design sector in Scotland is becoming," she told Dezeen.

Hunter selected objects by Scottish designers, makers and businesses, as well as people who have settled in the country and oversees companies with offices in Scotland.

Intended to act as talking points for visitors and guests, the pieces include the minimal and precise A-12 clock by Glasgow-based INSTRMNT, and a playful vessel made from found glass by Juli Bolaños-Durman.

Alongside these are a lightweight standing lamp produced using a material that combines recycled paper and resin by Jonathan Pang.

A rake-fired ceramic vessel by Skye-based artist Patricia Shone is also on display alongside a 3D-printed neckpiece by Glasgow-based designer Lynne Maclachlan.

Catalan designer Andreu Carulla, who has a second studio in Edinburgh, contributed a playful aluminium plate in the shape of a slice of bread to the collection, while Edinburgh-based artist Frances Priest provided a bowl influenced by her research into the history of ornament. 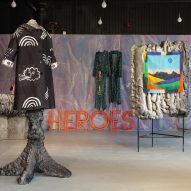 "The pieces I've chosen for the first minister's office are like a thumbnail of what's happening in the country and they introduce some of the people producing work that is a real credit to our culture," Hunter said.

"I thought it would be more effective as a talking point if the exhibition reflected some of the Scottish government's commitments," she added, "such as pride in Scotland's modernity and diversity, and the idea that it is a place that's open for people to come and create new lives."

The objects are in use and on display around the first minister's office, alongside artworks loaned from the Scottish National Gallery.

In addition to celebrating excellence in Scottish design, the project's aim is to demonstrate design's value in everyday life and create opportunities for recognition and patronage for those involved.

"Scotland is home to world-class artists and designers and I'm proud to be able to support the sector through the Local Heroes project," said first minister Nicola Sturgeon.

"I welcome visitors from both home and abroad and across the public and private sectors to my office at parliament and it's a privilege to help raise the profile of Scotland's exceptional design expertise."

According to its curator, the exhibition could help to stimulate further discussion around design's economic and societal value, as well as providing a platform for showcasing Scottish design to an influential audience.

"In any other country you'd expect the head of state's office to be full of items that were locally designed and produced, so why not ours?" Hunter pointed out.

"We desperately need to increase awareness both locally and internationally of the abundance of design talent we have in Scotland and this is a good first step."

The first minister has had an opportunity to interact with the objects since they were installed in November, and claimed to have received plenty of positive feedback.

"The initial collection has already been positively received, with well-deserved praise from visitors," said Sturgeon. "I look forward to welcoming further collections in the future."

The project was supported by Creative Scotland, the development body for the arts and creative industries in Scotland. Its director of creative industries Clive Gillman said the work on display "is emblematic of Scotland's desire to be understood as an open, contemporary, creative place."

Local Heroes was also responsible for an exhibition of contemporary Scottish design produced to coincide with the sporting event Berlin/Glasgow 2018 European Championships.