Designers and students have paid tribute to Pierre Keller, the graphic artist and former director of Swiss design school Ecal, who died of liver cancer on 7 July.

Keller directed the École Cantonale d'Art de Lausanne (Ecal) from 1995 to 2011, transforming it into one of the world's most influential design schools.

"He was a great influence to so many young students and professionals and in many ways Pierre shook up design education globally producing ripples that traveled far and wide," Pearson wrote in a comment on Instagram.

Born in Gilly in the Vaud region of Switzerland in 1945, Keller studied graphic design at Ecal, graduating in 1965. He became a renowned graphic designer himself, representing his country at numerous international biennials and winning several prizes.

He joined Ecal in 1995, transforming the school into one of the most highly regarded of its type in the world.

Under Keller's direction, the school became renowned for its graphics, photography and industrial design departments. One of his innovations was to bring in international brands to set real-world briefs for students while generating income for the school, a practice that has since been adopted by other leading schools.

Instrumental in securing the new building

Keller was also instrumental in securing architect Bernard Tschumi to design the school's new premises in a former knitting factory in Lausanne. The building opened in 2007.

Maxime Plescia-Büchi, a Swiss tattoo artist who studied graphic design at Ecal, wrote on Instagram that Keller "pretty much single-handedly redefined art and design in Switzerland". 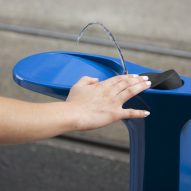 Designer Stephen Burks wrote: "Pierre Keller's genius combining the best international designers with the most recognizable global brands made the Ecal the preeminent design school in the world. His vision changed design education forever with good humor, personality and passion!"

Raised the profile of the school

Ecal released a statement thanking Keller for his contribution to the school.

"For more than 16 years, he developed Ecal in his image: dynamic, original and creative," the statement said. "Bouncing from one challenge to another, he carried out large-scale projects that helped raise the profile of the school.

"Whether it's the numerous exhibitions around the world, the many partnerships he has initiated with renowned brands and institutions, and the iconic Ecal building in Renens since 2007 that he entirely conceived with his friend the architect Bernard Tschumi, Pierre Keller always invested with passion in order to offer the best to his students."

The school added that, despite Keller's numerous awards and prizes, "his greatest pride will remain without zero doubt to have been able to help hundreds of young artists and designers to perfect their practice."