Students from the Swiss design school ÉCAL have collaborated with Japanese manufacturing company Yamaha to create six devices for playing music which were showcased at Milan design week.

Master product design students from Switzerland's ÉCAL/University of Art and Design Lausanne worked with Yamaha's design department to produce the music player prototypes over the course of a university semester.

The instruments were designed to encourage modern listeners to engage with sound in a more interactive way.

"Yamaha wanted to explore the topic that we've lost any physical interaction with sound playing devices because of things like the Bluetooth speaker, even buttons have become completely reduced," said ÉCAL product design graduate Maxwell Ashford.

They began by analysing photographs and videos of people listening to music and then identified design solutions that address modern listener needs.

The resulting prototypes were on show in event space Spazio Orso as part of the Fuorisalone events programme. They include a sculptural object that looks like a hanging mobile which was informed by the cultural phenomenon of ASMR – Autonomous Sensory Meridian Response .

Named ASMR Instruments, the device is intended to be placed next to the bedside where it will move with gravity to create very subtle rhythmic sounds that calm people and help them sleep.

"Cheung was finding that a lot of ASMR videos are coming from Tik Tok and YouTube are the least relaxing thing you could possibly have – you have adverts popping up all the time when you're going through the process of doing it," Ashford told Dezeen.

"So she wanted to translate it into an almost an acoustic, sculptural object," he added when discussing the students' research. 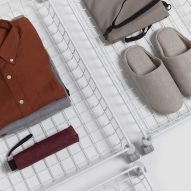 Elsewhere in the room, Åman's Bandmait device was on show. It used AI to play alongside people practising musical instruments to help them improve and learn how to play in an orchestra.

Rebholz created a home speaker named Spezi that has four channels, allowing users to switch seamlessly between multiple devices at home. For example, they can transition from listening to a television channel to their smartphone by pulling the corresponding button.

Meanwhile, Chung designed Sound Frame, a device that looks similar to a wooden photo frame. It was designed to play a set playlist when an inanimate object is placed within the frame, helping users recall memories and experiences through sound.

Users can scan an object that has sentimental value using the device's scanner and then programme it to play the set tracks when the object is placed inside.

Student Ronacher created a device that has mini stage lights and speakers, named Stagespeaker, to target those who listen to music concerts via live streams. The changing lights were programmed to flash as music plays, mimicking the experience of being at a live music concert.

The final design was called Vertical Player. After learning that vinyl sales surpassed the sales of MP3 players and CDs in 2020,  Villiger wanted to recreate the traditional vinyl player in vertical form.

The record player was mounted on the top of a tall and narrow silver rod which allows users to play records in an unconventional position.

Although the designs were only prototypes, the students were challenged with producing something that had the potential to be used in reality.

"Whilst they were given free rein, we always press the students to address the project in the most contemporary and relevant way," Ashford explained.

"There are still aspects that need to be considered for potential development but at the same time within the timeframe they had, they best present the concept in the most realistic potential."

ÉCAL is an art and design university located in Renens. Recent innovative graduate projects include minimalist sockets and light switches made of animal bones instead of plastic and nappies made from seaweed fibre.

The photos are courtesy of ÉCAL/ Santiago Martinez.