Henning Larsen designed the white angular volumes of Hangzhou Yuhang Opera to look like ice floes on a lake.

The waterfront performance venue in Hangzhou, China, contains a 1,400-seat auditorium, a 500-seat black box theatre, and an exhibition centre. Henning Larsen completed the building in May and it is now open to the public.

The white facade of the cultural centre in Hangzhou, China, is punctuated with geometric windows designed to create a pattern like cracked ice on a frozen lake.

Two sloping white volumes that are designed to look like ice form the opera house, with roofs that touch the ground at the place where they meet on a public plaza.

One side of the black box theatre can be opened to the plaza, transforming the space into an open air venue with the capacity for 10,000 people.

Visitors can walk up the roofs for a view out over the lake that the opera house stands alongside.

Mirroring the city's existing West Lake, the new body of water both reflects the opera house and provides a pleasant outdoor space for the city's residents.

"There is a competition amongst Chinese cities to create new destinations, each with their iconic cultural landmarks," said Claude Godefroy, design director at Henning Larsen's Hong Kong office. 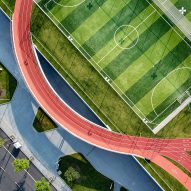 "When designing those cultural nodes our most important task is to create truly lively urban centres that can welcome citizens at all times whether they are paying guests or not."

A promenade rings the lake, which is dotted with retail spaces and pocket parks – including a traditional Chinese water garden.

Inside, a walkway connects both entrances around the auditorium and the foyer, with interior balconies and staircases to maximise views inside the building and out over the lake.

Other landmark cultural projects underway in China include Snøhetta's plans for the Shanghai Grand Opera House, which includes a spiral staircase roof, and the recently opened arts centre in Fuzhou that is formed of five volumes shaped like flower petals.

Danish architect Henning Larsen founded his practice in 1959 and run the studio until he passed away in 2013. Recent projects include plans to extend an opera house in Paris, and rebuilding a town hall for a town that is being relocated in Sweden before it's swallowed by an underground mine.