PES Architects used custom-developed ceramic tiles and louvres to create the curving lines of the Strait Culture and Art Centre in Fuzhou, China.

The Helsinki- and Shanghai-based studio arranged the five swooping buildings that make up the centre to unfurl like the overlapping petals of a jasmine flower – the symbol of Fuzhou.

Each of these functions is housed in a separate "petal", which fan out from a connecting concourse and roof terrace, accessed via public gardens and a plaza on the waterfront of the Minjiang River. An underground promenade connects the centre to a metro station.

PES Architects' primary materials for the project were steel, concrete, bamboo and a custom-developed ceramic, the latter of which was chosen for its historic connections to Fuzhou.

During the Ming Dynasty the city flourished as the overland Silk Road trading route waned in popularity next to the safer and more profitable maritime version. Located on China's southeastern coast, Fuzhou became a gateway to the Maritime Silk Road and its trade in prized porcelain.

Chinese white-coloured ceramic tiles and louvres were used to clad the exterior of all of the buildings, underlining the jasmine blossom aesthetic.

The louvres' angles and cascading gaps left in the facade give the buildings a delicate, translucent quality. 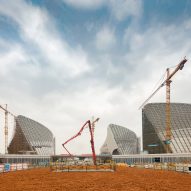 Two types of ceramic tile, developed for optimum acoustics, were created to clad the concert and opera halls. In the concert auditorium, tessellating panels engraved with a floral pattern cover the angled walls that interlock to create different level stalls.

In sinuous opera hall mosaic tiles in the shape of tiny flowers clad the curving, organic lines of the two levels of balconies and boxes, with smooth wood panelling lining the internal edges nearest to where the audience is seated.

Bamboo was used to clad the theatre hall, with solid blocks of bamboo made using a computer-controlled cutting machine to create the ideal acoustics. A flexible cable net ceiling in the roof can accommodate different lighting rigs.

Each of the arts buildings has a core area formed of a public gallery that curves to match the shape of the facade.

In the concourse lobby entrance the lifts and ventilation shafts are housed in "mushroom columns" that curve to meet the ceiling like the gills on a fungi. Blossom-shaped skylights in the roof allow daylight to filter through.

As well as the in Strait Culture and Art Centre in Fuzhou, which Marc Goodwin photographed during construction, PES Architects designed a theatre in Wuxi, to the west of Shanghai.