Kane developed Volta as his graduation project to complete his degree in Global Innovation Design at the Royal College of Art in London.

Kane describes Volta as a "spatial audio production platform that you use in virtual reality".

The application offers users a manipulatable 3D visualisation of "spatial audio", a term referring to audio that gives listeners the impression of being in a space with individual sources of sound coming from many different precise locations.

When using Volta, users can grab and move different elements of an audio track in a 3D environment in order to alter the perceived location of a particular sound source.

"When you have your headset on, the earphones on and you have the controllers, you'll be in this very expansive environment," explains Kane in the video interview, which was shot by Dezeen at the Royal College of Art graduate show.

"You can just reach out and grab different sound objects like drums, or the bass or the vocals," he continued.

Users can also ascribe motion to the sound objects, so that that the sources of individual audio elements sounds as though they are moving.

"You can record motion" he said. "You can create predefined orbits just by clicking a button, and that will just float around you at different paces," Kane said.

Kane's design for Volta was informed by his experience in music production. "The inspiration for the project really comes from my background as a musician and a music producer and a DJ," he said.

According to Kane, tools like Volta will become more and more important as audio production moves away from the simplicity of producing for two-channel stereo and towards a more intricate and immersive world of spatial audio. 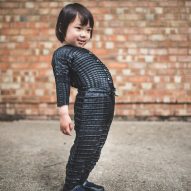 Petit Pli clothing expands to fit children as they grow

"We're moving in a direction where spatial audio and spatial music will supplant stereo in the same way that stereo took the place of mono," Kane claimed.

"I built Volta around a future in which entertainment is moving towards immersive experience. In that future spatial audio is going to be the norm. It's going to be the standard in the same way that stereo audio is now."

"While the experience itself seems fairly simple – you're just grabbing something and moving it around – the technology and the process for developing that is most definitely not," he said.

"The tools that we currently have to do that can be extremely tedious and convoluted. Volta does all the computation for you."

By offering users the opportunity to craft a 3D sound environment with their hands, Kane believes that Volta will enable a more physical approach to the creation of sound. "It will make producing audio in general a more expressive process," he said.

This video was shot by Dezeen at the Royal College of Art's 2019 graduation show. The music used in the video is In Search of Pala by Alex Kane.