Jean-Philippe Vassal, co-founder of Lacaton and Vassal Architects gave the 29th annual architecture lecture at the Royal Academy of Arts in London.

Vassal presented the studio's past projects and the core principles behind its work.

Lacaton & Vassal Architects are known for their social housing refurbishment projects, including Transformation of 530 Dwellings. This renovation project of a post-war housing estate in Bordeaux won the Mies van der Rohe Award this year.

The studio aims to take a contextual approach to its work, which takes advantage of the existing structures on a site.

It has previously completed the expansion of the Palais de Tokyo in Paris into a contemporary art district in 2014, and a translucent arts space attached to a former shipbuilding workshop in Dunkirk.

Dezeen wasmedia partner with the Royal Academy of Arts for this year's architecture lecture which was held in the David Chipperfield-designed Benjamin West Lecture Theatre, as part of the programme for the institution's summer exhibition. 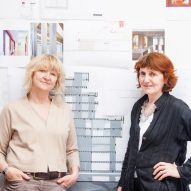 Last year's lecture was delivered by Yvonne Farrel and Shelley McNamara of Grafton Architects, who gave a talk on the 2018 Venice Architecture Biennale which they curated. Previous lectures have been delivered by Peter Zumthor, Wang Shu and Balkrishna Doshi.

Dezeen hosts and live streams talks and panel discussions from around the world. Recent examples include a talk with speculative architect Liam Young on how drones will change the city and a conversation with Arthur Mamou Mani about his bioplastic installation for COS.