Female faces peer out from a pink-hued wall mural that features inside this bar, which Bryan O'Sullivan Studio has created in west London hotel The Berkeley.

The bar is set within five-star Knightsbridge hotel The Berkeley and has been decked out in a selection of warm colours and materials that Bryan O'Sullivan Studio hopes will create a "cocoon"-like atmosphere.

"The rich history of the building provided a springboard of inspiration for what we hope is a timeless yet contemporary new edition to this London landmark," explained the studio's founder Bryan O'Sullivan.

The focal point of the bar is a snug that boasts a pink-hued mural by New York-based artist TM Davy.

Depicting a series of female faces with "mysterious and knowing expressions", the artwork makes reference to snugs found in old pubs where women would withdraw to socialise and enjoy alcoholic drinks without judgement. 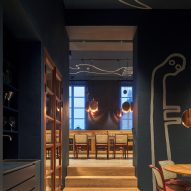 Portal bar in Stockholm designed to "exist outside of time"

An undulating blush-coloured sofa runs around the room's periphery, joined by a trio of coral seating poufs. Together they can accommodate just nine guests, making it suitable for intimate gatherings amongst small groups or couples.

Two veiny marble side tables and ornate glass wall sconces have been used for decoration. The space also comes complete with its own call-for-service button.

It nods to the walnut wood panelling on the lower half of the room's walls that was sourced from a 300-year-old felled tree on Lincolnshire's Felbeck Estate.

Curved doorways look through to the semicircular drinks counter, where liquor bottles are displayed on back-lit open shelving.

Rounded armchairs and sofas upholstered in mushroom-coloured boucle or olive-green leather have also been dotted throughout.

Bryan O'Sullivan Studio was established in 2013 and is based in east London's Shoreditch neighbourhood. Much like the studio, Swedish practice Claesson Koivisto Rune added quirky wall illustrations to the deep-blue surfaces of Stockholm's Portal bar, which was designed to "exist outside of time".