Consumer goods company Unilever has launched Cif ecorefill, a concentrated cleaning product that can be diluted at home within a refillable spray bottle, to reduce plastic use.

The Unilever product comes as a 10-times concentrated formula, which requires much less packaging than the regular size bottle.

Shoppers buy one spray bottle containing a Cif household cleaning product, which they can then refill with the concentrate.

If the trigger spray breaks on the bottle, Unilever will deliver a replacement free of charge.

Once the original bottle of cleaning product is finished, users can attach the Cif ecorefill to the bottle to release the highly concentrated product into the bottle, which they then fill with water to dilute.

In addition to being made with 75 per cent less plastic than a spray bottle, diluting the product at home amounts to 97 per cent less water being transported, 87 per cent fewer trucks on the road, and therefore a reduction in carbon emissions.

Unilever aims to produce all its ecorefill and spray bottles from 100 per cent recycled plastic by the end of 2020.

"The launch of Cif ecorefills is a game-changer when it comes to reducing plastic waste in the products we use to clean our homes," said Gemma Cleland, vice president of homecare at Unilever.

"Our research shows that two-thirds of us feel guilty when we throw away plastic and shoppers are looking for easy switches that can have a positive impact on the world around us," she continued.

"We think there's no better place to start than in the home," Cleland added. "By keeping a bottle of Cif and refilling and reusing it over and over again, consumers can reduce their consumption of single use plastic."

Refillable products are more important to customers than recycling, the company stated.

While trigger sprays are designed to last for 15 uses, which would be an average of five years, instead they are generally thrown away after just one use.

By reusing the bottles, Cif hopes to reduce the amount of trigger sprays being disposed of, which are problematic to recycle as many companies aren't equipped to deal with them.

The ecorefill itself is 100 per cent recyclable, with the exception of the plastic sleeve.

"Changing how we make, distribute, use and dispose of everyday products is one of the biggest environmental challenges the world is currently facing," said the company. "It's also an issue where consumption habits are just as important as business models."

"For companies like ours – that sell consumer goods – this is particularly challenging," it continued. "Even more so for household care and cleaning brands, because the safety requirements for these products mean they need sturdy packaging that doesn't leak."

"Refill and reuse options are an important part of tackling the issue of single-use, disposable bottles. The challenge has been finding a way to do it that's viable and easy to use." 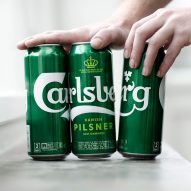 Compact and light, the ecorefill costs less than an ordinary Cif spray bottle, and is currently available to purchase in supermarkets across the UK.

Danish beer brand Carlsberg made a similar move last year when it replaced the plastic ring wrapping used to secure its multipack beers with eco-friendly glue, reducing its plastic waste by up to 76 per cent.

Carlsberg's focus was on reducing ocean plastic, which amounts to an estimated 12.7 million tonnes per year.