Two gently undulating greenhouses will form the Aldin Biodomes complex, which WilkinsonEyre has designed for Elliðaárdalur valley in Iceland.

Located on the outskirts of Reykjavik, the greenhouses are being designed by WilkinsonEyre in collaboration with local studio Basalt. The complex is being created to open up the largest green area close to the Icelandic capital to the public, with the aim of boosting wellbeing during the country's dark winter months.

It will comprise a series of public spaces and two glass biodomes – a man-made, self-sufficient ecosystem that is engineered to imitate nature, which will be filled with exotic plants from other regions.

"Elliðaárdalur was chosen for its proximity to Reykjavik urban tissue, being off centre enough to be embed in nature but of direct access from the main road arteries," said director Paul Baker.

"It will provide local people and visitors with a year-round tropical oasis and gathering point, helping to boost wellbeing during the region's dark winter months," he told Dezeen. 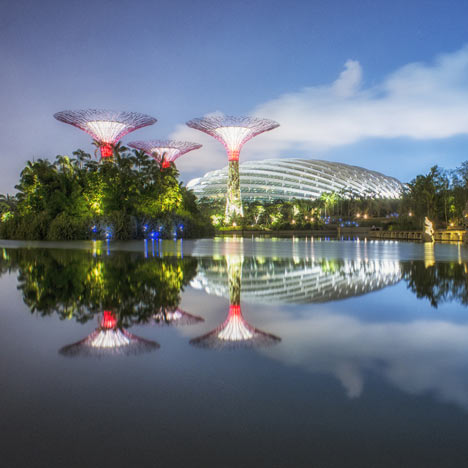 Gardens by the Bay by Grant Associates and Wilkinson Eyre Architects

The two domes in the complex will be linked by an information area, restaurant, shop, market and Farm Lab – an educational environment on local food production.

These will be combined to create a gently undulating form, which WilkinsonEyre modelled on the scale of surrounding residential areas and topography of the site to create "an elegant addition to the city skyline".

"The aim of the scheme is to generate the right space for ecosystems to grow and evolve, and to merge the architecture with the surrounding landscape," added Baker.

"The vicinity of the residential areas and the topography of the site have informed the shape and scale of the scheme."

Once built, the Aldin Biodomes will be positioned to maximise views of Iceland's midnight sunsets in the summer, and the northern lights during the winter.

It will also be designed by WilkinsonEyre as "an exemplar in sustainability". The greenhouses will be heated using the region's abundant geothermal energy, and it is hoped the building will become carbon neutral.

WilkinsonEyre is an architecture studio founded by Chris Wilkinson in 1987 with Jim Eyre, which has offices in London and Hong Kong. In 2012, the studio completed the Gardens by the Bay in Singapore, one of the world's largest climate-controlled glasshouses.