The AIA Gold medal-winning architect was best known as the designer of the Petronas Towers in Kuala Lumpur, formerly the world's tallest building.

Pelli, who was a senior principal at Pelli Clarke Pelli Architects, passed away on 19 July 2019.

Along with the Petronas Towers, Pelli's most significant buildings include One Canada Square at Canary Wharf in London, World Financial Center in New York City and the National Museum of Art in Osaka.

Pelli was born in 1926 in Tucumán, northern Argentina. He studied architecture at the Universidad Nacional de Tucumán before moving to the United States to attend the University of Illinois School of Architecture.

After graduating, Pelli joined the studio of Eero Saarinen, where he would work for ten years on projects including the TWA terminal at JFK Airport, which has recently reopened as a hotel. 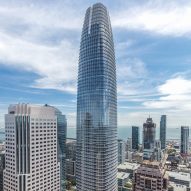 In 1977 Pelli established his own firm Cesar Pelli & Associates, which he would run for the next four decades, with the name changing to Pelli Clarke Pelli Architects in 2005.

Pelli was known as a skyscraper architect and he created tall buildings in cities across the world.  The most prominent of these was the Petronas Towers in Kuala Lumpur, Malaysia.

The pair of 451-metre-tall towers were the tallest in the world between 1998 and 2004, and remain the tallest twin towers in the world. The building was also awarded the Aga Khan Award for Architecture.

In the UK Pelli designed the 235-metre-tall One Canada Square tower in Canary Wharf, London, which was the tallest building in the country from 1990 to 2012.

His studio was also the architect of the Gran Torre Santiago. Completed in 2010, the 64-storey tall skyscraper in Santiago, Chile, is the tallest building in Latin America.

In 2018 Pelli Clarke Pelli Architects completed the Salesforce Tower in San Fransisco, which at 326 metres is the tallest building in the city. The tower was named Best Tall Building Worldwide by the Council on Tall Buildings and Urban Habitat in its 2019 architecture awards.

Pelli was one of Argentina's most prominent architects and the country's president Mauricio Macri tweeted his condolences. "The works he [Pelli] leaves throughout the world as a legacy, is a pride for Argentines," he said.

In a video message. Mahathir Mohamad, the prime minister of Malaysia, described Pelli as a "great architect".

Architecture critic Paul Goldberger added that Pelli had a significant role in the development of skyscraper architecture.

"Very sad to hear of the death of Cesar Pelli, at 92," he tweeted. "He was a warm and gracious man, a civilising presence in his life and his work, an architect of great dignity and lively creativity who did as much as anyone in the last generation to evolve the form of the skyscraper."

Main image is by Casa Rosada.