A dramatic twisting staircase and a spacious conservatory are some of the striking features that Luigi Rosselli Architects has added to this 1920s Sydney home.

The house is located in Sydney's affluent Bellevue Hill neighbourhood and takes its name from a 100-year-old pepper tree that extends up over its roof.

Originally built in the 1920s, Peppertree Villa was formerly made up of a series of gloomy living spaces and had an awkward staircase that was making its owners reluctant to spend time on the first floor.

Luigi Rosselli Architects, which is based nearby in the suburb of Surrey Hills, was tasked with creating better circulation between rooms and directing views outdoors towards the verdant garden – without compromising the home's historic features.

"The 1920s was divided between neoclassicism and modernism, like the paintings of Picasso. We wanted to have this tension between the two apparent in the modern additions and traditional materials [of the house]," the practice told Dezeen.

The house's three floors are now connected by a dramatic twisting staircase that extends up to a new attic room. At several points its sandy-beige balustrade curves away from the flanking walls, forming what the practice describes as a "suspended sculptural ribbon".

"[We] had to jump up and down on the treads to convince both the client and the builder of its strength and stability before they would consent to remove the temporary supporting props," added the practice.

A conservatory with black-framed glazed walls has been created at ground level, dressed with a rounded leather sofa, chunky brass coffee table and a couple of potted tropical plants.

Full-height teal shutters can be drawn across to close off views of the garden and provide inhabitants with a sense of privacy.

Luigi Rosselli Architects worked alongside interior design studio Romaine Alwill to develop the look of the rest of the home, opting to apply a "lush and tactile" material palette. 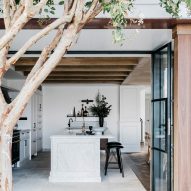 The kitchen features dark-wood joinery and a veiny marble splashback, while baby-pink ceramic tiles have been applied in a herringbone pattern on one of the bathroom floors.

Doors and modestly-sized windows throughout have been swapped for large panels of glass, bringing in an abundance of natural light.

This is seen best in the master bedroom, where the glass panels slide back to reveal a spacious en-suite centred by a standalone bath.

The practice also overhauled the home's garage and created a pool in the back garden.

Although Bellevue Hill is mostly dotted with sprawling mansions that are home to some of Australia's notable millionaires, back in 2016 interior designer Dominic Kuneman overhauled a micro-apartment in the neighbourhood.