Tbilisi designer Max Machaidze has created a range of jewellery made up of found objects including pom-poms, skateboard wheels and industrial ceramics from Soviet-era machinery.

The oversized jewellery and a parallel series of sculptures are based on childhood memories of creating towers by piling up stones.

"As kids we all assembled vertical towers with rocks," the Georgian designer said. "I use the same formula but instead of rocks I use old baseballs, Soviet ceramics used in electricity, skateboard wheels, crystals, car parts etcetera."

The objects combine nostalgia for both twentieth-century America and the Soviet era, when Georgia was a republic of the Soviet Union from 1922 to 1991.

"I look for things that are in a dialogue with earth, that have lasted for a period of time and are still around, some scratched some weathered," said Machaidze.

Another chain features resin cubes made by a craftsman who makes loaded dice that are used by scammers in casinos.

"He's a guy that is in the blacklist of all casinos because he makes special dice with weights or double numbers, so when you look at the chains they look like they come from children’s jewellery construction kit," said Machaidze.

"But they were hand crafted by a professional scammer that has been making dice for 30 years."

Machaidze created the objects as part of the Sadaawhere? fashion brand he runs with his wife, Iri Todriashvili. Their clothing collection also features found materials and fabrics.

Their studio is based at Stamba Hotel, a former Soviet-era printing house in Georgia's capital Tbilisi. Machaidze provided artworks for the hotel's rooms and lobby and created objects for the public areas.

Machaidze is also one half of experimental hiphop duo KayaKata and is a key figure on Tbilisi's underground creative scene. 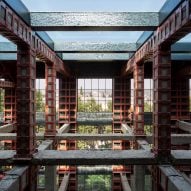 "The clothing, jewelry and sculptures we make is fuelled by the music we make," he said, describing his music as "like prayers on voodoo beats".

"We have a huge tribe, we fill up clubs and we are a part of the youth resistance movement," he added. "That is probably the reason why all of our products have a specific warrior vibe to them."

Machaidze will feature in a forthcoming exhibition of emerging Georgian artists and designers at Window Project gallery in Tbilisi. Other creatives that will be featured include designer Lado Lomitashvili, fashion label Situationist and artist Shotiko Aptsiauri.

Born in 1995, Machaidze is the son of electronic musician and film director Nika Machaidze.

"People also know me as an activist," added Machaidze. "I participated in lot of street protests since I was 16, working on decriminalising drugs, protecting gay rights etc."

"I also study psychedelic substances and my works have a lot to do with them. So I kinda have been illegal since a young age, dancing on the edge."

Photography is by Levan Maisuradze and Tina Shaburishvili.