A series of minimal white blocks interlock to form this holiday home by Studio Andrew Trotter, which takes cues from local architecture in Puglia.

Named Villa Cardo, the four-bedroom dwelling is designed for a couple who wanted a peaceful summer retreat amidst olive groves in Carovigno, a town in the south of Italy.

Studio Andrew Trotter modelled the residence on traditional cubic houses found across Puglia to ensure that it complements its surroundings.

By using local construction techniques the studio made sure the building is light, airy and cool.

"When designing, I look for ways for my buildings to fit within the local area. I want my house to belong to their surroundings, not stand out and something strange or too new," studio founder Andrew Trotter told Dezeen.

"We wanted to keep the house simple like the old local buildings, white cubes that have a feeling of the past, to fit beautifully in between the olive trees."

Houses in Puglia are traditionally constructed from a local sandstone called Tufo that has a high thermal mass. They also often feature vaulted ceilings and cut-outs in the facades designed to cool the houses.

Finished with a chalky-white paint, Villa Cardo borrows these details to reduce its dependence on air conditioning in the summer or heating in the winter.

There is also a TV room that can sleep two people, alongside a bathroom and a Turkish bath with an outdoor shower.

The master bedroom has its own veranda that looks out over the sea, a private garden and an outdoor bath and shower. 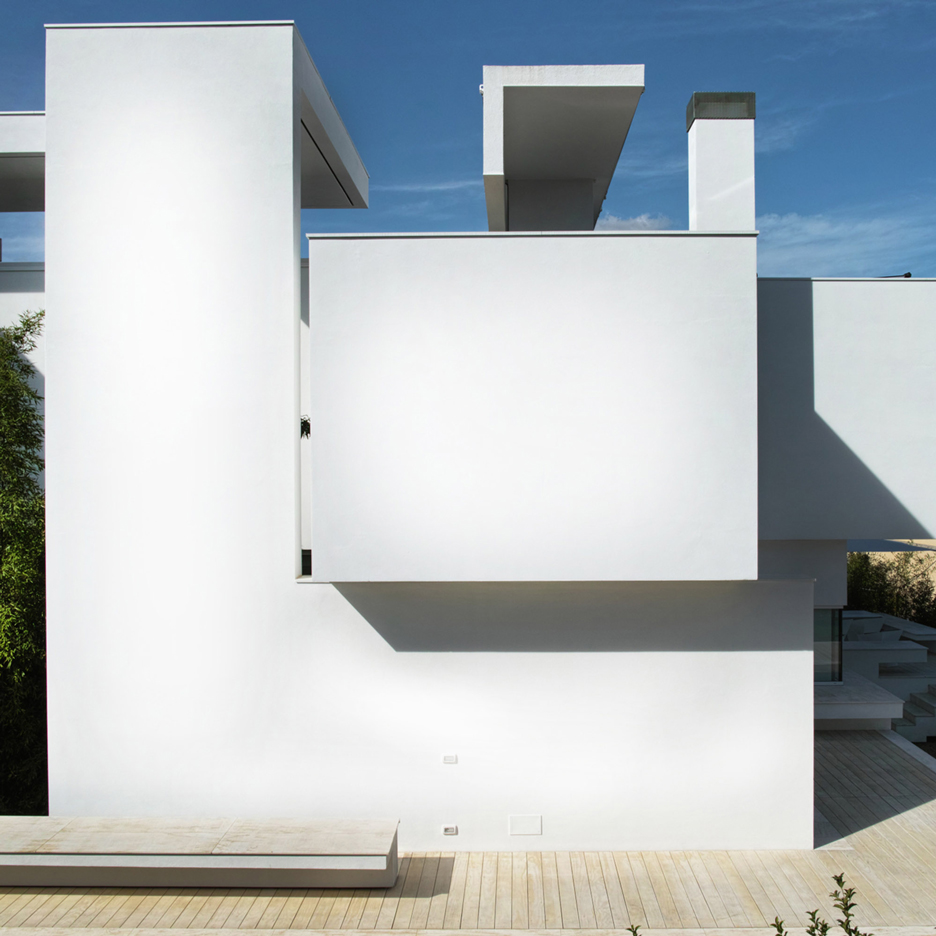 Studio Andrew Trotter designed each room with a deliberately "simple and basic" finish that echoes the minimalist aesthetic of the house's exterior.

Local limestone floors feature throughout, and are dressed with a mix of vintage furniture teamed with Ghost sofas by Gervasoni, dining chairs by Fredericia and lamps by Flos and Santa Cole.

The bathrooms and kitchen are lined with a bespoke terrazzo finish by Huguet Mallorca.

Studio Andrew Trotter also converted a small century-old outbuilding that was formerly used to store the tools and the olives into a separate bathroom and guest house that can accommodate two people.

It sits opposite the main house behind a linear pool and an outdoor kitchen. The kitchen is sheltered by a bamboo canopy and host to a wood-fired oven, dining terrace, sofa, and sun beds.

Due to its reflective properties white is a popular choice for houses in hotter climates.

Design Haus Liberty also recently completed a white holiday home in Italy, which is characterised by a series of living spaces connected to rounded terraces that extend out like petals from a flower.

Photography is by Salva López.