Digital design studio Squint/Opera has reissued a series of speculative visualisations depicting London in 2090 when climate change has left much of the city under water.

The Flooded London series, first created in 2008, shows how citizens might adapt to catastrophic rising temperatures and sea levels.

"The world is currently standing on the verge of a potential climate catastrophe and therefore these images have become more relevant than ever," said Squint/Opera founding director Alice Britton, explaining why the studio has decided to reissue the images.

"Last month the UK became the first country to declare a climate emergency, and we felt it was the right time to revisit these images to help Londoners imagine how the seemingly abstract concept of climate change might affect their everyday lives, through familiar parts of the city."

The images, which Squint/Opera describes as "curiously utopian", were initially created for a 2008 exhibition in London and depict a vision of the city in 2090.

One image shows a man dressed in swimming trunks, preparing to dive from the Whispering Gallery into the flooded nave of the abandoned and overgrown St Paul's Cathedral.

Another shows the south London suburb of Honor Oak, where a terrace of Victorian houses disappears beneath the floodwaters and a resident of one of the houses above the water line repairs his submarine.

"The general scenario is set 80 or so years into the future, long after the sea levels have risen," Squint/Opera wrote at the time the images were created. "The catastrophic side of the sea coming in has long since passed and the five images are snapshots of people going about their lives, having adapted to the world's new circumstance."

"The scenes present London as a tranquil utopia with the architecture of the distant rat race suspended below the water. The people in each scene appear to be relaxed and happy in their environment." 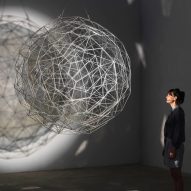 In another image, two women are fishing from an abandoned office block at Canary Wharf, while in another a man and a woman squatting in what was once the Tate Modern art gallery are trying to generate electricity using a pedal-powered contraption made of found machinery.

The final image is an underwater view of St Mary Woolnoth, a church in the City of London designed by Nicholas Hawksmoor and opened in 1727, in which fish swim in shoals through the submerged iron gateway while a rowing boat floats languidly above.

"The installations are optimistic and reveal that far from being a tragedy, the floods have brought about a much-improved way of life to the capital city," said the studio, which used photography, 3D modelling and digital manipulation to create the images that pay homage to the idealised landscapes of Victorian painters.

"We were fascinated by the future of cities and how humans respond to changing environments through technology and human behaviour," said Britton.

"As an agency at the intersection of communications, technology and the built environment we wanted to give a fresh perspective on how people might respond to climate catastrophe, imagining a future that is curiously utopian."

While scientists agree that climate change will cause sea levels to rise, scientific studies have predicted a wide range of possible scenarios ranging from 50cm to two metres by the end of the twenty-first century.

Based in London and New York, Squint/Opera has worked on projects including a collaborative virtual-reality design tool created in conjunction with architects Bjarke Ingels Group and UNStudio.