French architect India Mahdavi has distorted the familiar coloured stripes found at seaside resorts to create the scenography for this exhibition of 20th-century furniture from the Centre Pompidou's collection.

The exhibition presents more than 60 pieces from the Parisian institution's 20th-century collection at the Cercle Naval de Toulon – a heritage-listed 1930s building designed to host receptions for the region's naval officers.

The pop-up show was organised as part of the fourth edition of the Toulon Festival of Indoor Architecture, which is held in conjunction with the annual Design Parade event at Villa Noailles in nearby Hyères.

The Nouvelles Vagues exhibition is curated by the Centre Pompidou's Marie-Ange Brayer and explores how the shape of furniture evolved throughout the last century in response to lifestyle changes and the emergence of leisure culture.

"This exhibition of furniture, lounge chairs and inflatable pop reflects an evolution of manners and our relationship to the body," said Brayer.

The furniture on display includes early 20th-century chaise longues by the likes of Eileen Gray and Robert Mallet-Stevens, who reinterpreted the deck chair in new materials such as bent tubular steel and plywood.

These modernist designs are presented alongside contemporary versions of the chaise including a lightweight chair by Maarten Van Severen that is made from polyester and aluminium.

Another section of the exhibition showcases the emergence of more casual, lounge-based living in the 1960s. Examples from this period include Olivier Mourgue's Djinn seating collection (1964), Joe Colombo's radical Tube chair (1969), and the original Sacco bean bag chair (1968). 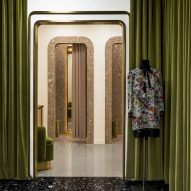 The exhibition's upper level celebrates the exuberance and optimism that defined the era of Pop art and design.

Several examples of inflatable furniture from this period are displayed on a sloping surface that emphasises their featherlight materiality.

The show's setting in an iconic art deco building in the port city of Toulon informed Mahdavi's design for the scenography, which borrows from the traditional seaside aesthetic of coloured stripes and the forms of the furniture on show.

"In a tribute to designers' propensity to soften the strict figure of a piece of furniture, the stripe, eternal symbol of the beach, is subject to India Mahdavi's distortions," said the architect's studio.

The furniture is arranged on podiums and surfaces covered with swirling patterns that distort the familiar stripes to create more free-form shapes.

The wavy patterns evoke both the undulating surface of the sea and the curves of the furniture, which were designed to fit more comfortably around the contours of the body.

The International Design Parade Festival was held from 27 to 30 June 2019. The exhibition in Toulon is open to the public until November 24th.

Paris-based architect Mahdavi is known for her flamboyant style that manifests itself in projects displaying "a certain vision of happiness and colour".

Her previous interiors have included a womenswear section at a Berlin department store featuring geometric floors that reference Bauhaus patterns and a London fashion boutique with a mustard-yellow and bubblegum-pink palette.