French architect India Mahdavi has collaborated with Swedish homeware brand Svenskt Tenn to create an exhibition at Stockholm Design Week that focuses on a print by designer Josef Frank.

Mahdavi's Frankly Yours exhibition is centred around the Vegetable Tree print, which Frank – an Austrian architect who fled to Sweden and became one of the country's most well-known designers – developed in the 1940s.

The print depicts a "tree of life" hung with fruit and vegetables.

To give it a new expression for Frankly Yours, Mahdavi designed the exhibition space at the Svenskt Tenn store to be completely dominated by the print, which was used to cover two sofas designed by her as well as the walls.

"I see this as a conversation between me and Josef [Frank]," she told Dezeen, adding that she often uses the designer's fabrics in her own interior design work.

Scattered colourful cushions designed by Mahdavi add a playful feel to the multi-patterned furniture and walls.

The architect has also designed two new products for Svenskt Tenn, a pewter tray and vase that are versions of pieces from her Petits Objets collection.

"I changed the size and materiality because it was my first time working with pewter," Mahdavi said.

"It was interesting but we did it during [coronavirus] confinement so I couldn't go to the factories. So there was that missing relation, but actually, I was quite specific about what I wanted."

Mahdavi chose to use two pieces that she thought best related to the Vegetable Tree design of the print.

"The two elements that I chose are not only ones that have an easy function but at the same time, the peanut looks like it has come from a tree and the vase looks like a trunk," she explained.

According to the designer, she wanted to work with the Swedish company partly because she hopes to one day run a similar company herself.

"I have always admired Svenskt Tenn, and not only for its distinct design aesthetic," Mahdavi said. 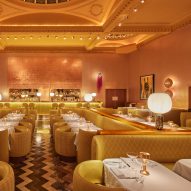 "I love the fact that Svenskt Tenn was founded by a woman, Estrid Ericson, back in 1924 and that today it is owned by a foundation where the profits go into research in various areas," she continued.

"Being both an internationally established company while at the same time maintaining the human scale is appealing. I hope that my company will grow in the same way."

The exhibition is one of a number of events taking place as part of the ongoing Stockholm Design Week.

The September dates were originally supposed to coincide with trade event Stockholm Furniture & Light Fair, but this has been postponed for the third time since the coronavirus pandemic began. The trade fair is now focusing on a "strong comeback" in February 2023.

Last February, a number of brands came together to show new products including furniture maker Offecct which showed French designer Pauline Deltour's final designs for the brand, which were launched posthumously.

Frankly Yours is on show at Svenskt Tenn as part of Stockholm Design Week from 5 September to 23 October 2022. See Dezeen Events Guide for an up-to-date list of architecture and design events taking place around the world.

The photography is courtesy of Svenskt Tenn.