Spools of scarlet thread and huge sheets of steel make an unconventional pairing inside this store in Chongqing, China, which Joy Season Studio has created for independent fashion label Annakiki.

Annakiki is headed up by designer Anna Yang and aims to produce clothing that strikes a balance between "tradition and rebellion".

When it came to designing the brand's Chongqing store, Joy Season Studio, in turn, decided to offset bold hues with what would typically be considered a standard construction material – steel.

"The bright red colour becomes the protagonist of the new concept store," explained the studio.

"In our designs, you can find high-saturation colours and dramatic scenarios that conflict but still have a dialogue between each other."

The store is centred on a cluster of red columns that have rows of metal spokes protruding from their surface. Spools of scarlet thread have been slipped on top of each, a feature which the studio hopes will "let the public feel the vitality of the clothes". 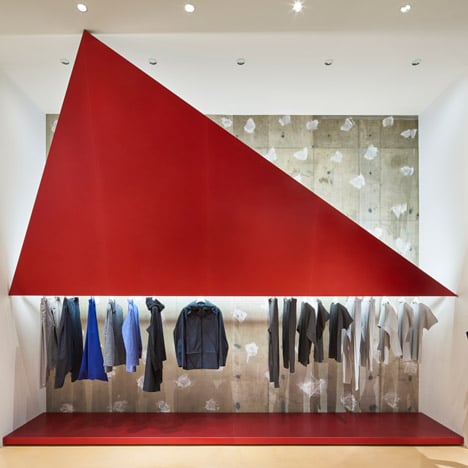 Alongside the spool column are 24 blocks of rose-coloured marble, where small accessories like glasses, hats or bags can be displayed.

Lights with white, rectangular shells are distended from the ceiling in the same arrangement, directly illuminating products underneath.

A majority of the surrounding walls, which are punctuated with arched openings – are clad with expansive panels of brushed steel. This excludes the changing room area and service counter, which have been completed in the same bright-red hue that appears throughout the store.

Steel has also been used to form the curve rails from which garments are suspended.

Decor has been kept to a minimum, bar a few quirky details – a rear wall in the store has printed with a graphic of two staring eyes and a full-length display mirror has been bordered with huge red polka dots.

Red has long been a colour of choice for designers looking to make a visual statement within a retail space – back in 2015 Tokujin Yoshioka installed giant crimson triangles above clothes rails in Tokyo's Issey Miyake store, while Marko Brajovic suspended 30,000 vermillion shoelaces from the ceiling of a Camper shop in Melbourne.

Annakiki isn't the only striking clothes store to have opened in Chongqing. The city is also home to womenswear boutique SND, which Various Associates designed to feature fur-covered changing rooms, angled walls and mirrored detailing.