Dutch artist Thijs Biersteker collaborated with scientist Stefano Mancuso to create this installation at the Fondation Cartier that shows the real-time impact of climate change on nature in Paris.

His project with Mancuso is titled Symbiosia and seeks to promote awareness of the impact of climate change by providing visitors with a visual representation of its affect on local trees.

"I believe that the symbiotic and communicative relationships in nature, explored in Symbiosia, are key in preparing humanity to understand the value of a harmonious ecosystem," Biersteker explained.

"This is needed for a future that is a balance between technology, humanity and nature."

Symbiosia is located in the garden of the Fondation Cartier pour l'art contemporain in the French capital's 14th arrondissement, and comprises a pair of digital displays connected to two of the garden's trees.

Mancuso – the scientist behind the International Laboratory of Plant Neurobiology in Florence – helped to develop a calculative data-driven system that estimates the real-time impact of climate change on nature in the city.

The display enables visitors to observe how factors such as daily traffic and droughts caused by increasing summer temperatures affect the growth of the trees.

The data is presented as a pattern of tree rings, with a new ring generated every second rather than every year.

The visualisation is based on data gathered from a series of sensors that measure solar radiation, CO2 levels, air quality and temperature, as well as humidity, soil temperature and moisture levels, rain and dew point.

These environmental factors cause fluctuations in the trees' photosynthesis, which affects the growth of the rings hidden behind their bark. The thickness and shape of the rings allow visitors to observe the short- and long-term impact of climate change. 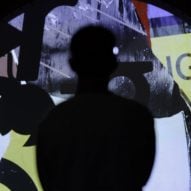 Biersteker described the project as "a fluid mixture between art and techno-poetic science, translated in an accessible and relatable way" and an attempt to "give trees a visual voice about one of the most important topics of today: climate change".

The artist was invited to create the artwork as part of an exhibition called Trees organised by the Fondation Cartier.

The exhibition aims to foreground the latest scientific thinking about trees, which presents them as having sensory and memory capacities, as well as communication skills.

The notion of "plant intelligence" is explored by various international artists working alongside botanists and philosophers to produce work in a variety of media.

The Trees exhibition can be viewed at the Fondation Cartier until 10 November 2019.

Photography is by Thibaut Voisin unless stated otherwise.