The San Francisco dwelling was designed for a retired couple who were transitioning to city life after residing in a single-family home in California's wine country.

The lifestyle change was prompted by their desire to downsize and dedicate more time to leisure activities.

The unit occupies a nine-storey building in the city's Pacific Heights district. The couple wanted a space that blended refinement with cosiness, and also offered cheerful moments that could help counter San Francisco's foggy days.

Large windows, city views and a modern sensibility all played into the design process. Macdonald said she aimed to "reimagine what a high-end, city apartment could be".

"The goal was to create a home that didn't feel too formal or contrived – one that found the perfect balance between sophistication, comfort and the unexpected," she told Dezeen.

The apartment presented some challenges, such as limited space and odd dimensions. In the public areas, an abundance of large windows minimised the usable wall space and also created a "fishbowl effect".

Macdonald came up with several clever solutions to these issues.

For the only blank wall in the room, she used grey plaster with a textured look, which serves as a contrast to the light-toned surfaces.

Affixed to the wall is a horizontal, oak shelving unit with a sliding door that conceals a television. The door has a mirror, which helps the fairly compact room feel more expansive. 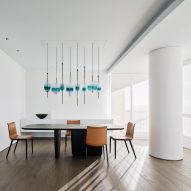 The living room is fitted with a contemporary white couch and a curved sofa wrapped in yellow velvet. The custom-designed sofa extends into a floor-to-ceiling bay window, increasing seating space.

It is one of several pieces that was finessed in order to maximise every inch within the apartment.

The living room also features a woven rug, a side table by Konekt, a maple coffee table and a pair of green, wedge-shaped poufs. Windows are covered with sheer drapes that provide privacy while adding a soft touch to the space.

In the dining area, the designer placed a round, sculptural table with extensions that make it suitable for dinner parties. Suspended above is a cloud-shaped lighting fixture by Apparatus.

The geometry of the room's windows – particularly the angular bay window – informed the stitching pattern used for the dining room chairs.

Similarly, in the kitchen, pendants by Workstead are meant to reference the glazed apertures. Chunky stools with rope seats help "tone down the formality of the space".

The master bedroom features a similar interplay of elegance and playfulness.

Conceived as a "sanctuary from city life", the sleeping area features a custom bed with a wood-and-velvet headboard and built-in nightstands. The bed's design takes cues from a nearby building.

"The geometric shapes of the bed were derived from the window patterns of a neighbouring hospital, but softened and beautified with velvet, white oak and organic-shaped reading lights," said Macdonald.

In a guest suite, the team placed a bed with a velvet headboard in deep blue, a round side table and a wooden desk topped with glass. Green, yellow and orange accents help enliven the space.

The apartment also features an office that doubles as a media room. Wallpaper inspired by tiles in the London Underground was chosen for one wall, adding a sense of energy and movement.

Similar to other elements in the home, the wallpaper is meant to "complement the shapes of the windows and cityscape".

Other dwellings in San Francisco include a renovated house by Jamie Bush that features an eclectic array of furnishings, a slender Victorian dwelling that was overhauled by Edmonds + Lee, and a minimalist apartment by Garcia Tamjidi with built-in cabinetry that is hardly noticeable.

Photography is by John Merkl.