Architecture practices OMA and CCDI have won the competition to design the International Conference and Exchange Centre on the waterfront in Shenzhen.

The studios' design divides the conference facilities and 400-room hotel into into three distinct volumes, which will be angled towards each other to create a large, triangular atrium.

Situated on the Pearl River Delta in the Qianhai district, the International Conference and Exchange Centre (IFEC) has been designed to be a "beacon for the ships sailing along the 21st-century maritime silk road".

The conference centre block will be a stepped building with terraces that face the large public park, which is also part of the scheme.

A taller, polyhedron-shaped volume next to it will house the hotel rooms, with hotel amenities and public spaces contained in a third volume facing the business district.

The three blocks will be built around an "urban atrium", which will serve as a foyer to the conference centre and the hotel, and a stage for cultural events held in the city.

The IFEC is one of several buildings OMA has developed in Shenzhen. In 2013 the Dutch practice completed the Shenzhen Stock Exchange, a 250-metre skyscraper that earned the nickname of "the miniskirt" for it's three storey podium that is elevated 36 metres off of the ground.

That same year OMA won the competition to design the Essence Financial Building, a 180-metre tower with two large outdoor terraces that will slice through the facade. 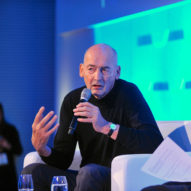 OMA was founded in 1975 by Dutch architect Rem Koolhaas. In a keynote speech at the World Festival of Architecture that he gave last year, Koolhaas said that Western architects must lose their "sense of superiority" about not taking on projects in countries with authoritarian regimes such as China.

"In China, there's a very authoritarian regime that is doing wonderful things in many ways for its citizens," he said.

"What preoccupies me is the only thing we can do is judge, and judge those developments entirely as negative. We are unable to be both critical and have sympathy."