Designed as the first ever cross-border cable car the Blagoveshchensk – Heihe Cable Car will be built across the Amur River, which marks the border between eastern Russia and China.

UNStudio has designed the station in the city of Blagoveshchensk, on the Russian side of the border, while the architect of the terminal in the Chinese city of Heihe has yet to be announced.

"As it crosses the natural border of the Amur River, the Blagoveshchensk – Heihe cable car will be the first ever cable car system to join two countries and cultures," said Ben van Berkel, founder of UNStudio. 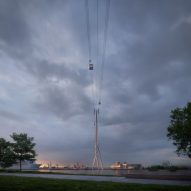 UNStudio designed the Blagoveshchensk Cable Car Terminal to reference the historic connections between the two cities, which although separated by a river were often joined in the winter when the river froze.

"This context provided rich inspiration for the Blagoveshchensk terminal station, which not only responds to its immediate urban location, but also becomes an expression of cultural identity and a podium for the intermingling of cultures," added Van Berkel.

Created to appear like a "a beacon for a joint prosperous future between the two nations", the cable car station is designed to have views of both the Russian city and across the river to China.

A public roof-terrace will be built on the river side of the building, while the route passengers take before boarding the cable car has numerous views of the city of Heihe. Visitors arriving in Russia will be presented with a framed view of Blagoveshchensk when they leave the cable car.

As with international airports, the cable station will be divided into land-side and air-side areas, with the latter security-controlled and only accessible by staff and passengers.

The building will be topped by a publicly accessible restaurant and conference centre along with a roof garden.

Cable cars are increasingly being proposed as an option for public transport. Architecture studio BIG has incorporated a gondola in its design for the Oakland A's ballpark, while Marks Barfield and Davis Brody Bond have proposed building a cable car system in Chicago.

Along with the Blagoveshchensk Cable Car, UNStudio is also designing cable car systems in Gothenburg and Amsterdam. Van Berkel believes that cable cars can be both a useful, but also an enjoyable public transport option.

"Cable car systems provide a new form of public transport that is sustainable, extremely fast, reliable and efficient," he said.

"Although primarily a pragmatic solution, cable cars are also a very congenial way to travel as they enable us to see and experience our cities in a whole new way."