Bangkok architecture studio Archismith has built a garden enclosed by 20,000 glass bricks as part of a sales office for a residential development in Bangkok, Thailand.

Named The Glass Fortress, the sales gallery has been longlisted in the Dezeen Awards 2019 within the business building category.

Archismith designed the space to be largely disconnected from its site as a rival developer's sales gallery is located nearby.

The main building is set back from the street with a protruding block constructed from glass bricks acting as an entrance pavilion and enclosing a garden.

"Eight-metre-high walls cut off pollution such as traffic noise and the untidy scenery of the MRT line construction in front so that a serene atmosphere can be created inside the building," said Jirawit Yamkleeb, co-founder of Archismith.

"To reduce the claustrophobic feeling of the space, glass block was chosen as the main material since it serves the purpose and natural light can still get through," he told Dezeen.

Within the glass brick walls – which are supported on a steel frame – is a secret garden with trees planted on either side of a central path. A water-misting system has been installed to help control the temperature of the garden on hot days.

According to the architect, this space is meant to represent a large garden that will be built as part of the apartment development.

"There is a big garden provided at the main development so the garden at the sales gallery is created to demonstrate the feeling of 'living with nature'," said Yamkleeb.

The glass-brick walls continue inside the main building where they enclose a seating area.

Alongside this light-filled space is a room containing models of the development, which leads onto two show apartments and offices for the sales persons.

In total 20,000 glass bricks were used to create The Glass Fortress. Each of the rectangular bricks used has edges that extend to partially conceal the grouting. This detail reduced the visible grouting from a standard 10 millimetres to two millimetres. 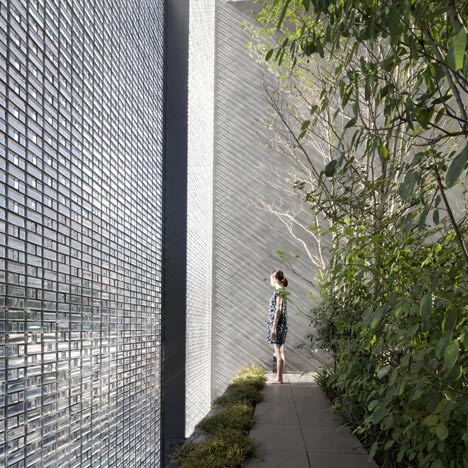 "This detail is important for the aesthetic of the project as it helps to create a more continuous look of the glass facade," added Yamkleeb.

Although the sales office has been built on rented land, there is an agreement in place that the glass-brick structure will be retained when the land is returned.

"We are unsure of the future program of the building in the landlord's mind but it could be used as a cafe with a nice garden inside or an Airbnb since there are already two rooms with attached bathrooms available. The future MRT station is very near so this holds great possibilities," explained Yamkleeb.

The Glass Fortress is one of 267 architecture projects that has been longlisted for Dezeen Awards 2019. Other projects on the longlisted include a pastel-pink church hall and a house on the Great Wall of China.

Photography is by Spaceshift Studio, except main image by Sky Ground and unless stated.