International architecture firm Gensler has proposed creating a pavilion alongside Notre-Dame as a temporary place of worship following the fire, which destroyed the cathedral's roof.

Situated on the square in front of the cathedral, Pavillon Notre-Dame is designed to host church services and markets for residents and visitors while the 850-year-old cathedral is being restored.

Notre-Dame's timber framework in the attic caught fire on 15 April 2019, with flames rapidly destroyed the roof, causing its spire to collapse into the nave below.

Gensler designed the conceptual proposal in response to calls from Notre-Dame's rector, Bishop Patrick Chauvet, and the mayor of Paris to create a temporary structure for the site.

Pavillon Notre-Dame would replicate the exact dimensions of the nave of the cathedral so that it feels familiar.

The roof would be made from Ethylene Tetra Fluoro Ethylene (EFTEC) cushions, a lightweight plastic membrane, and the walls from translucent polycarbonate panels.

Panels behind the altar could be removed to give those inside an unobstructed view of Notre-Dame's west face.

These moveable panels could also be added, rotated or removed at ground level to enclose the Pavillon space for religious ceremonies or open it up for markets and performances.

In a symbolic gesture, its frame would be made of charred timber.

"Charred timber, which is one of the oldest and most effective methods of protecting wood from fire, also symbolises that what once destroyed Notre-Dame will only serve to make it stronger, thus expressing a language of rebirth and transformation," said Gensler principal Duncan Swinhoe.

Gensler said they wanted to create a "humble" space that was sensitive to its site and the situation, which could become a community hub while Notre-Dame undergoes its restoration. 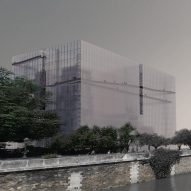 "It is important that the design is true to, but doesn't upstage, the cathedral," added Swinhoe.

"We wanted to strike a balance between a structure that invites the community yet can be transformed to become a reflective and spiritual haven when mass is celebrated. We hope this offers the people of Paris, and the world, a statement of hope and rebirth."

French president Emmanual Macron has pledged to rebuild Notre-Dame in just five years, in time for the Paris 2025 Olympic Games, something experts claim is impossible.

Architects and designers from around the world have created proposals for potential replacements for the lost spire, including a glass spire and a public greenhouse.

American architects Soltani+LeClercq have proposed a translucent membrane that could veil the cathedral during its reconstruction, like a butterfly in a chrysalis.

Gensler was founded in 1965 by Art and Drue Gensler, along with James Follett. In 2016 the practice proposed building a bubble of steel and glass that could float on the Thames and temporarily host the UK's parliament while the main building undergoes restoration.

After an earthquake hit New Zealand, destroying the Christchurch Cathedral, Japanese architect Shigeru Ban built a temporary replacement out of cardboard to host the congregation displaced by the disaster.