Residences that take cues from the canal houses in Belgium and the Netherlands, and minimal wood-clad homes in Scandinavia feature in this new development on the outskirts of Atlanta.

The new community called Serenbe was founded by Steve Nygren, who describes himself as a "developer by default". He purchased 60 acres (24 hectares) of the area, complete with a farm, in 1991. Now, the sprawling area is ever-growing with housing and commercial ventures.

Located in Georgia's Chattahoochee Hill Country, and a 30 minutes drive from Atlanta International Airport, Serenbe is characterised by its red clay earth, rolling hills and dense pine forests, as well as its dense neighbourhoods.

Nygren sought to harness the area's natural charm by creating a new type of neighbourhood in this undeveloped area south of the city – one that focused on community, rather than space and isolation often found in America's sprawling suburbs.

"I wanted to be focused on being a town versus a development," he told Dezeen.

As an attempt to save the area from cookie-cutter houses on large plots, Nygren chose to build free-standing homes close to one another and have them centred around a main commercial strip, complete with several townhouses structures.

The outer areas are left untouched to allow nature to flourish, while a natural wastewater treatment system has been designed by Reed Hilderbrand.

To model such a community, Nygren rezoned the 1,400 acres (566-hectares) on a cluster of villages with dense housing and commercial activity. Nature serves as the divides.

"We moved all the density to 30 per cent, and 70 per cent has to be maintained for any agricultural activity," he said. "So it can be equestrian or farms, but it cannot be residential housing."

Four different neighbourhoods, or "hamlets", make up Serenbe, which are spread across the property in "serpentine omega forms". Also featured across the development are shops, restaurants, a hotel, horse stables, a farm, nature trails and pastures.

Each neighbourhood is designed with a different architectural style, and also serves a different focus or "key pillar" that Nygren has identified for a healthy life. These pillars are art, agriculture, wellbeing and education. The first two have been built, the third is currently being developed. The fourth, for education and play, is yet to break ground.

Nygren worked in Phil Tabb, who has a doctorate focused on the English village system, to act as a consultant on the development.

"I wanted to really see what we could do to make Serenbe look more organic as a town rather than a development," he told Dezeen. "So that's why you see the variety."

To make these neighbourhoods distinct from one another, Nygren looked to housing models around the world for architectural inspiration, taking cues mostly from European cities. Almost all of the structures are designed and built in-house by Serenbe Planning and Design.

Building typologies in England, the Nordic countries, the hill towns of Italy, France, the Netherlands and Belgium proved most influential.

"I was inspired by the countryside of England," he said. "After world war two, they realised they couldn't indulge in urban sprawl because the island was only so big and so they put in land laws."

Currently under construction is Serenbe's Mado neighbourhood. The architecture has Scandinavian influences reflective of the colourful buildings in Malmo, Sweden and Copenhagen.

In addition to having many free-standing houses nestled close to one another, Mado also features a cafe, spa, gym and outdoor pool. 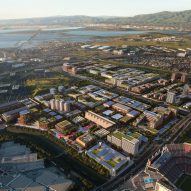 "We looked at what are the components that make for great communities in the past, and great places where you want to visit, or live," he said.

The fourth neighbourhood, which focuses on play and education, is yet to be built and is expected to include a four-acre (1.6-hectare) park in the woods, an observation tower treehouse and a zip line.

Other parcels include Serenbe's first neighbourhood called Selborne, which broke ground in 2004. It features a varied architecture style and cues to the 1930s with brickwork and bungalows. Construction on the second borough, called Grange, started in 2007 and consists of white brick townhouses from the 1890s that are evocative of the Low Countries.

A smaller neighbourhood in between these two, called Crossroads, comprises 16 cottages that are evocative of the American South in the 1800s when homes were painted white because the paint pigment was expensive.

Today, the Serenbe community is home to over 650 residents. Along with acting model for a new community development in the American South connected to nature, it forms an experiment in urbanism and commercial activity, creating a wealth of jobs in its stores, restaurants, and other service sectors.

Other new neighbourhoods in North America include Foster + Partners' proposal for a development in Santa Clara and a "neighbourhood of the future" on Toronto's waterfront designed by Alphabet's Sidewalk Labs.

Photography is courtesy of Serenbe.