A sofa with "puzzle piece" cushions and a wooden table with mismatched legs are among Egg Collective's new works fillings its cosy showroom in New York City.

The all-women design collective has created five new pieces that have been strongly informed by its storefront in Lower Manhattan, which opened earlier this year. The collection comprises the Hornbake sofa, the Finn table, the Howard chair, the Landry bookcase and the Martie console.

Having worked on the collection simultaneously to designing its showroom, Egg Collective created the pieces to be in tune with the new space.

"The products were actually informed by some of the decisions we were making in the architecture and vice versa," Crystal Ellis told Dezeen at the showroom's opening in May. Ellis is one of Egg Collective's three founders, joining Stephanie Beamer and Hillary Petrie.

"We really feel like there is a conversation that is happening between the space and the objects that were brought in," Ellis said.

Among the designs is an L-shaped sofa with curved seat cushions that join together in an irregular layout, as opposed to the box shapes of traditional cushions. It is shown in the showroom upholstered in a mustard fabric but the textile can be customisable.

"Tailored yet completely relaxed, the Hornbake sofa's boxy exterior is juxtaposed by its soft sinuous interior," said the studio. "Lyrical and elegant, the seat cushions interlock like puzzle pieces."

Following these irregular lines is a larger wooden bookcase called Landry. The piece features a middle shelf and a back that can be removed for a more open design. Differently designed supports serve as its three legs as well.

The Martie console features a triangular top with curved edges resting on three slender rounded wood legs that all extend up through the top of the piece.

Martie comes in two heights, with its taller one forming a work desk.

All of the wood pieces can be made in walnut, blackened walnut, natural white oak, blackened white oak or bleached maple.

Rounding out the collection is a "statuesque" upholstered chair. Rigid U-shaped units wrap over arm supports to create a layered piece. Called Howard, the chair is built with a solid wood frame and hand-tied springs, and can come as a sectional or straight sofa as well. 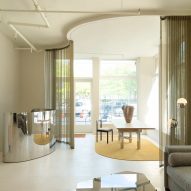 Egg Collective was founded by Beamer, Petrie and Ellis in 2011 in New York, after the three first met at college in Missouri and rejoined forces years later to start designing furniture.

The new products join a host of other pieces designed by studio, such as a variety of credenzas, side tables, coffee tables and mirrors in addition to its handmade wooden furniture collection.

Another design studio to launch new furniture designs in New York City is Irish label Orior, which has also opened a showroom in Tribeca filled with its colourful pieces.