Rafał Barnaś has used digital animation to create a world that resembles moving paper cutouts for an upcoming movie, which will tell the story of a house in Poland designed by his brother.

Named ArchiPaper: A Surrealist Story About Architecture, the film simulates a paper diorama coming to life. Barnaś combined digital animation with photographs of a physical model of the house to create the effect.

"My goal was to try a new way of telling about architecture," said Barnaś, who runs audiovisual and architectural visualisation studio Unique Vision Studio. "The film is a huge aesthetic experiment and my tribute to architecture."

Barnaś conceived of the animation while working on a film of the physical models of Polish Farm – a house designed by his brother, who is an architect and the founder of BXB Studio.

"During the shoot, I had physical models of his designs to work with, including the model of the Polish Farm, a unique house that is currently under construction," said Barnaś.

"I thought: what if I could try to transform the model of the design into a paper world that would teem with life? This challenge appeared fascinating to me as I am an enthusiast of searching for and experimenting with stylistic means and measures."

So far, Barnaś has released a trailer for the movie. The full four-minute film, which will be released later this year, has been created to show the house and its use in an unconventional way. 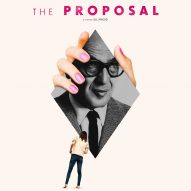 "My goal was to break away from contemporary trends stressing fast-paced narratives, hence each relatively static frame tells its ambiguous story about architecture at a leisurely pace, allowing viewers to immerse themselves in the abstract reality," explained Barnaś.

"ArchiPaper is, therefore, a stylistic experiment, an attempt at finding and trying out alternative means of expression in describing architecture, but also my own broadly understood artistic challenge, both in the context of visuals and the musical score that I had written and later recorded myself," he added.

ArchiPaper is the latest film created with an architectural focus. Earlier this year Jill Magid released a film documenting her preoccupation with the Mexican architect Luis Barragán.