Jill Magid, the American artist who made a diamond ring out of Luis Barragán's ashes, has released a film documenting her preoccupation with the Mexican architect.

The film premiered at the 2018 Tribeca Film Festival and is rolling out in public cinemas across the US this summer. It marks the final output of Magid's multi-year project called The Barragán Archives, which explores the rights to Barragán's works.

Barragán, who died in 1988, is one of Mexico's most important architects and is best known for his brightly coloured houses.

In 1995, his archive was bought by Rolf Fehlbaum, owner of Swiss furniture brand Vitra, who gave it to his fianceé at the time, Federica Zanco, as a wedding present.

Today, the archive is housed on the Vitra campus in Germany and is almost inaccessible to the public.

Artist "offers body" of Barragán in return for body of work

The Proposal follows New York-based Magid as she embarks on a trip to Mexico City, where she ends up staying in the architect's house, Casa Barragán.

The visit prompts the artist to devise a way to bring the architect's archives back to Mexico. Her idea is to use Barragán's cremated remains to form a diamond ring to give to Zanco in exchange for the material.

"I was working on this question of is it possible to reverse that gift so that if one were to offer the body of the artist, could the body of work become more accessible?," Magid told Dezeen.

"You have this combination of my deep attraction and connection with his architecture with this question around representation," she added.

"These are some of the most important questions of our moment, about proprietary control, who has access to what and how do you trademark international property."

"All I wanted to do was sleep there and write"

Magid spoke to Dezeen ahead of the film's public opening at the IFC Center theatre in New York on 24 May.

The artist, who is captured sleeping in Barragán's bed and writing at his desk during the movie, said she was surprised by the affection she developed for him and his work.

"I went into his house and studio in Mexico City and I was incredibly moved," she said.

"It happened really organically and almost surprisingly," she continued. "My visceral experience was being in the house and all I wanted to do was sleep there and write."

"It really wasn't in my wheelhouse to start making an artwork about my love of Barragán architecture."

The Proposal follows Magid in 2016 as she produces the ring from Barragán's cremated remains. The procedure involves exhuming Barragán's ashes from the Rotonda de los Jaliscienses Ilustres.

A chemical process is then used to extract carbon from the ashes, which was then turned into graphite and exposed to extreme heat and pressure to form the diamond.

The project caused much controversy when Barragán's great-nephew Tadeo Pintado Barragán Cervantes Omana said that he was "outraged" to discover his ancestor's remains were used to create the ring. 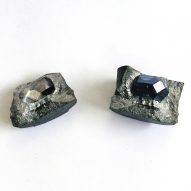 Magid, however, claims that the body was exhumed with permission from 18 members of the architect's family, although she admits the project is intentionally provocative.

"It's important for me that artwork has the power to ask uncomfortable questions," she said.

"It's great when the debate is an informed one."

The feature film is narrated by Magid and follows the artist as she pursues a meeting with Zanco, owner of the Barragán archive. She writes a number of letters asking to arrange a date to discuss ownership of the trove, with many politely rejected by Zanco.

Magid eventually secures a meeting with Zanco and Fehlbaum to present the offer but no arrangement is agreed, and has not been since.

"I understand it's a big question," Magid said. "I wasn't expecting a yes or no right there at the table."

"The proposal is something that is open for a whole lifetime," she added.

Barragán was born in 1902 and died in 1988 at the age of 86. He is celebrated as one of the most important architects in Mexico's history. He was a key member of the modernist movement, working closely with influential American architect Louis Kahn.

Awarded the Pritzker Prize in 1980, architecture's equivalent of the Nobel Prize, the architect is recognised for a portfolio of brightly coloured private homes and gardens.

The Convento de las Capuchinas Sacramentarias, a convent in Mexico City, and the stables at Cuadra San Cristóbal, which are just outside of the capital, are among his best-known works.