Designer José de la O has teamed up with technology firm Mirai Innovation to develop a way for people to manipulate the shape of a vase using only their thoughts.

"The experiment toys with the idea that, in a near future, sophisticated digital interfaces could empower people who don't need technical skills to design," De la O explained.

"Learning a specific craft, a 3D software, or even sketching, could no longer be necessary to design and produce everyday objects."

De la O's Mexico City-based interdisciplinary design agency specialises in innovation, and with this project wanted to explore how an emerging technology might enable users to shape the objects they live with.

The experiment was conducted using a devise called Aura, which was developed by Mirai Innovation to support professionals working in industries such as health, education and business.

The Aura headgear is covered with sensors that monitor different bio-signals from the brain, including electro-encephalograms.

During the experiment, two participants with no existing design knowledge or skills were asked to sit in a comfortable chair in a room without any distractions that might influence their thoughts.

The subjects sat facing a screen onto which the computer-generated model of a typical vase was projected. They were able to incrementally alter different characteristics of the vase such as its height and diameter by relaxing or concentrating their minds. 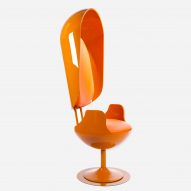 The Aura headgear captured the bio-signals produced by their brains and transmitted these to an operator in a separate room, who input the data into a computer.

Once the participants were satisfied with the form they had created, the manipulated file was sent to a 3D printer to be made into a physical object.

According to De la O, the experiment points to a possible alternative future in which consumers take on greater responsibility for creating the objects they want to live with.

"This questions the future role of the designer, who today might be seen as a gatekeeper for what may or may not be produced and used, as design follows specific commercial agendas and imposed aesthetics," he suggested.

"Are designers becoming obsolete? Or would they evolve into the ones designing these mind-reading design platforms?"

De la O established his studio in Eindhoven in 2010 following his completion of a masters degree at Design Academy Eindhoven, before relocating to his hometown of Mexico City in 2013.

The studio works across product design, visual identity, advertising, creative consultancy and new strategies, with a focus on creating new ideas that could benefit society.

Dutch designer Merel Bekking also incorporates neuroscience into her practice, and used it to create a "scientifically perfect" chair for Dezeen founder Marcus Fairs based on subconscious style preferences gathered from a brain scan.