Goldsmith Street is a Passivhaus and high-density social housing scheme by Mikhail Riches in Norwich, England, which is shortlisted for this year's Stirling Prize.

Located near the city centre, the housing development comprises 105 terraced dwellings designed to be an affordable high-density alternative to apartment blocks.

Each home faces south to maximise solar gain and is designed by Mikhail Riches with practical detailing that ensures that it is low energy.

"Our priority was to design a passive solar scheme in order to minimise fuel bills for residents," explained the studios founders Annalie Riches and David Mikhail. "We also wanted to put back streets in an area of Norwich that had lost them," they told Dezeen.

"The scheme faces windows and habitable rooms south to make the most of winter solar gain and is shaded in the summer."

Mikhail Riches won a competition to design Goldsmith Street in 2008, with a proposal that imagined streets rather than the apartment blocks proposed by many other entrants.

The scheme comprises seven terraced blocks arranged in four lines, containing a total of 45 houses and 60 flats, within an area of less than one hectare.

While the number of dwellings within the development was dictated by the brief, it was the studio's desire to create a "passive solar scheme" that led it to design terraces. The buildings needed to be low-rise to prevent overshadowing.

To achieve this while meeting the density of housing required, Mikhail Riches took cues from a high-density housing area called the Golden Triangle – a neighbourhood of Victorian terraced houses five minutes from the site.

"We looked at the nearby popular conservation area in Norwich, which has terraced streets 14 metres apart, significantly less than the guidelines for overlooking allow," explained Mikhail Riches.

"By emulating this street pattern we were able to get significantly more family houses in the scheme, which matched the local housing need. Within the site boundary we were able to fit four linear east-west terraces with a combination of strategies." 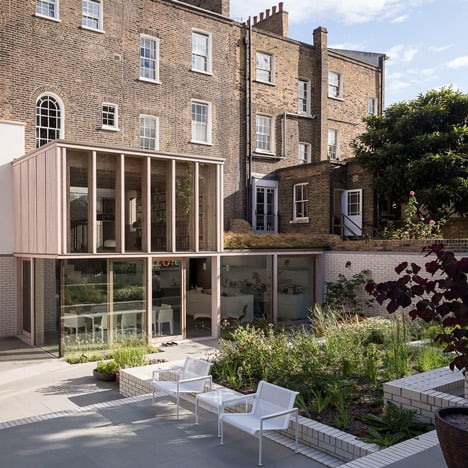 An open alley runs through the centre of the scheme, which Mikhail Riches developed to double as a shared communal garden and safe play area for children. There are also two other landscaped play areas onsite.

Much of Goldsmith Street's other key detailing was developed by Mikhail Riches for practical reasons to ensure the scheme met Passivhaus standard – an international energy performance standard intended to dramatically reduce the requirement for space heating and cooling.

Every wall is over 600 millimetres thick, and the rooftops are positioned at 15 degrees to maximise solar gain while ensuring each terrace will not block sunlight from the windows of the row behind.

Throughout the scheme, Mikhail Riches also incorporated white window reveals that insulate the window frames and also serve to splay the reveals – a design that helps improves light into interiors and views out.

Other finishing touches to the scheme include a material palette of milky cream-coloured clay bricks and black glossy tiles on the rooftops that echo building materials found throughout Norwich, and curved walls on each corner to disguise internal staircases while also gently leading visitors into the streets.

Every bin store, fence and garden gate is bespoke, made with galvanised-steel clad with aluminium mesh and then spray-painted, and there are different-coloured front doors at street level for each dwelling to provide a sense of ownership. 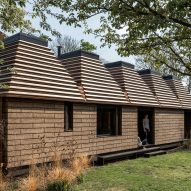 Other projects by the studio include plans for phase two of Park Hill estate regeneration and an east London home described as "a big house that's been knitted back together".