Kanders' resignation on 25 July has incited a positive reaction from the community of artists and advocates who have protested his position as a Whitney board member for months.

"But even as Kanders' resignation is cause for modest celebration, we and those in our coalition have always been clear – this moment is the beginning of the conversation, not the end," he continued.

"The Whitney now has an opportunity to show leadership on a critical and international issue in contemporary culture, and to enter into a process of reckoning: how should 21st-century cultural institutions reflect and serve their communities?"

Kanders resigned following months of protests at the museum after it was reported that Safariland Group, which he owns, supplied tear gas to law-enforcement agencies.

His departure follows a number of cultural institutions coming under scrutiny over their links to unsavoury businesses. Their reliance on funding from firms deemed to be unethical has been dubbed "toxic philanthropy".

"How do we maintain and support our institutions in ways that don't produce problematic relationships like the one we've just addressed?," Trafford said. "We hope that the Whitney's leadership recognises the urgency of these questions, and seizes the opportunity presented to them by the Kanders controversy."

Earlier this month, Yana Peel resigned as CEO of London's Serpentine Gallery following criticism of investment firm Novalpina Capital, which is run by her husband and in whose regulated fund she has a small, passive investment. The firm is the majority owner of NSO Group Technologies, an Israeli company which has been condemned by human rights group Amnesty International for producing spyware.

Novalpina acquired a large stake of NSO Group Technologies earlier this year. NSO has been condemned for providing its Pegasus software to authoritarian regimes including Saudi Arabia.

The Louvre museum in Paris was similarly shrouded in controversy this month when it removed the Sackler name from a wing of its building, following revelations of the family's business ties to the global opioid crisis.

The Sackler's links to opioids have been known for while and other institutions have severed funding with them, including New York museums the Guggenheim and the Metropolitan Museum of Art. Both have announced they will no longer accept gifts from the family.

Revelations of Kanders' dubious ties led to 100 staff signing a letter to ask the museum for an explanation and a protest led by action-oriented group Decolonize This Place. Fifty-two artists whose works are currently displayed at the museum for the Whitney Biennial signed the open letter calling for Kanders' resignation. Among the protestors were London research design studio Forensic Architecture.

In addition to signing the open letter with fellow artists and activists, Forensic Architecture wrote a letter to the biennial curators asking for its work be withdrawn from the showcase.

"We requested that our work be withdrawn from the biennial as a result of a combination of what we felt was the inaction of the museum and the board to act on what we considered to be very reasonable demands... to remove Warren Kanders from his position as vice chairman of the board," Trafford said.

The Whitney Museum of American Art described Kanders' resignation as an "extremely difficult" decision. Now that he has left his position, all artists and designers will continue to showcase their work through the run of the biennial, which ends on 22 September 2019.

The controversy at the Whitney began in November last year, when the New York Times reported that tear gas distributed by Kanders' company Safariland was used against migrants and protesters at the US-Mexico border. It was also reportedly used against protestors in San Juan, Puerto Rico.

Forensic Architecture also discovered this month that bullets made by weapons manufacturer that is run by a company partially owned by Kanders, Clarus Corporation, have been used by the Israeli forces against protesters in the West Bank and Gaza. 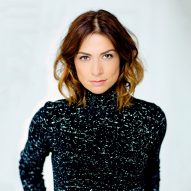 Trafford said the studio was "quite worried" and "agonised" over its decision to be involved in the Whitney Biennial. In response, Forensic Architecture produced a 10-minute-long movie called Triple-Chaser for the biennial, in which it suggests that Kanders' company may be complicit in war crimes. Trafford was the project coordinator of the video, and it was made with filmmaker Laura Poitras of New York studio Praxis Films.

"We felt we were in an interesting position," Trafford said. "We felt like we had possibly a unique or unprecedented opportunity to unite these two domains in which we work very often in, and which touch upon each other but often don't always come together quite so closely, and that's the domain of human rights and the domain of arts and culture."

"What we found in the Kanders controversy is that these two had really collided in a way that was kind of unavoidable," Trafford continued. "Were we to be a part of the Whitney Biennial, we would have to engage with it. The film was our response to that."

Top photograph is by Andrew Lichtenstein, courtesy of Getty Images.