Perched at an elevation of 9,000 feet (2,743 metres), Horizon is a new development located atop a popular ski resort destination in the midwestern United States.

Canadian architecture studio MacKay-Lyons Sweetapple has completed the first phase of the project, which comprises eight units. Once finished, the development will include a total of 30 holiday homes and a communal lodge.

The Horizon neighbourhood will serve as the home base for Summit Series, an organisation that brings together professionals from various fields in a spirit of entrepreneurship, activism, and environmental stewardship. Previously, their lectures have included figures such as Amazon's Jeff Bezos, musician Kendrick Lamar, and organisational guru Marie Kondo.

"This isn't another ski resort, but rather a planned community for entrepreneurs and creatives working together to address global challenges," the studio added.

The wooden structures are set far enough apart from each other to provide privacy, but close enough that they can share certain amenities.

"The cabins are aggregated around courtyards in a way that maximises both community and privacy to foster chance meetings and social interactions," said the architects.

The gabled structures are either oriented parallel to the slope, "like mountain goats," or jut out into the landscape, "like extreme skiers." 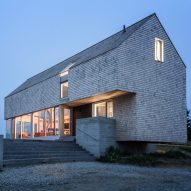 Because of the site's steep terrain and large amounts of annual snowfall, most of the homes are accessed on the upper level, via a steel walkway. A series of footpaths connect the various homes, reinforcing Horizon's sense of community.

The simple structures are clad in cedar planks and shingle roofs, drawing from traditional homes located in the nearby Eden Valley below.

Generous amounts of glazing provide plenty of views of the landscape. Images of the project show several units that have a partially covered terrace overlooking the mountainous panorama beyond.

"The siting of the buildings and bridges was carefully organised to minimise views into neighbouring units, while framing unobstructed, southwest sunset views," said the studio.

Cedar wood lines the interiors, contrasting the structure's dark concrete floors. The shiny finish was chosen for its heat retention properties – it captures solar radiation as the sun hits it, helping keep the interiors warm.

MacKay-Lyons Sweetapple was founded over 30 years ago in Halifax, Nova Scotia by Brian MacKay-Lyons and Talbot Sweetapple. It recently opened a satellite office in Denver, Colardo, and Horizon marks the firm's first completed project in the US.

The firm's previous projects in Nova Scotia showcase how the firm often draws cues from historical and vernacular building types. Examples include a pair shingle-clad structures raised atop a concrete plinth and a Corten steel extension to a farmhouse.

Photography is by Doublespace Photography, unless otherwise indicated.