Avella Taller de Arquitectura has reconstructed a recreational summer camp in Venezuela, including solid brick buttresses that draw on a nearby Spanish colonial fortification.

Two Cabins in Yaracuy is located in the Massif de Nirgua, a mountainous region not far from the Caribbean coast.

The children's camp originally consisted of cabins built from wattle and daub – a composite of interwoven sticks covered with mud or clay. These were hand-built 14 years ago with the local community's help.

Over time, the 40-hectare estate had grown informally, and the structures were eventually rendered inadequate for the number of kids who attended the camp.

Ricardo Avella from Avella Taller de Arquitectura (ATA) was commissioned to replace the cabins with two new builds, while retrofitting existing structures so they would be suitable for future expansion.

The project became more about creating an "architectural grammar" for the entire camp rather than ad-hoc improvements.

The solid brick buttresses, inspired by ruins of a nearby 16th-century Spanish fortress, stand out among the cabins' architectural components.

"From the beginning, I thought of proposing a catalogue of elements that could bring both new and existing structures a common identity to the estate," Avella told Dezeen. "The buttress is one of those elements, and brick, as a material, is another one."

"We sought to create a flexible compositional unit constituting the buttresses, brick sills, wooden windows and overall structure for any changing circumstances on the estate".

Avella's Two Cabins are constructed primarily of handmade brick, clay tiles, and plaster — materials with a long tradition in Venezuela that could be sourced despite ongoing socio-economic and political crisis in the country.

"The crisis has greatly affected the construction sector, and it has been extremely difficult to find basic materials like cement, steel bars, and, of course, finishing materials," Avella added.

"This condition is forcing architects to find creative ways to turn the situation around." 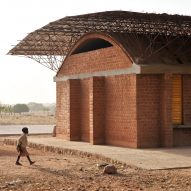 Plaster was mixed with iron oxide for durability and floors were covered with hydraulic cement mosaics from the Catia neighbourhood of Caracas.

Roofs are intensely sloped to address excessive water accumulation, a notorious problem in one of the country's wettest regions.

The cabins' structure also informs a spatial order" for the bunk beds that are housed within, avoiding the previous issue of overcrowding:

The buttresses and metallic frames with diagonal beams prevent this outcome in the future. Now there's only space for one bunk bed in between two buttresses, ensuring enough room for children to climb into their beds from all sides."

Other architects and firm who have created educational buildings for children include Snøhetta, which revived an old wooden boathouse in Norway into create a dormitory for a children's summer camp and architect Diébédo Francis Kéré, which built a school for his home village in Burkina Faso.

Photography is by Saúl Yuncoxar.