Proposed for a site on Cody Dock, an industrial area in east London, the conceptual facility was designed by Adaimi to help improve London's air quality.

It incorporates Daan Roosegaarde's Smog Free Towers and technology by Graviky Labs to collect harmful carbon, which is then transformed into dye and ink to decorate textiles and clothes.

"As air pollution in the city of London increases, the population and surroundings are slowly suffocating. Almost two million people in London live in areas with toxic air," Adaimi told Dezeen.

"The Carbon Capture Facility transforms carbon from a harmful substance to a new useful material, which becomes a capital that could then help finance the battle against air pollution."

Adaimi designed the Carbon Capture Facility as part of the Royal College of Art's (RCA) Interior Design masters programme called Redefining, Reusing and Recontextualising, which is led by Graeme Brooker. 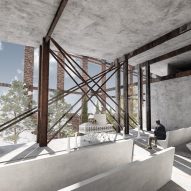 The facility features two of Daan Roosegaard's Smog Free Towers, which are located in two "indoor gardens" positioned at either end of the abandoned warehouse.

Using the same air purifying technology that is used in hospitals, these towers would suck in smog and capture carbon residue, before releasing purified air from vents.

Air Ink is a dye made from unburned carbon soot from car exhaust pipes, chimneys and generators that is collected by Kaalink filters. These filters would be given to drivers across London.

All the carbon that is collected from this infrastructure would then be processed within a series of two-storey workspaces designed by Adaimi, including a lab, testing area and production area for processing the Kaalink filters, alongside a fabric store and studio spaces for dyeing, drying and sewing to create the textiles.

Characterised by pitched roofs and tinted glass facades, they are positioned at the heart of the old warehouse within its existing trusses, and are connected by a long elevated walkway designed by Adaimi to optimise circulation.

"Artisans and scientists work together and reuse the carbon residue generated by the air filtration," explained Adaimi,

"A new material resource is thus created and is used as a dye and ink for textiles and clothing."

Flanking the workspaces, the Carbon Capture Facility is complete with a publicly-accessible cafe and shop where the fabrics and clothing are sold.

All the interior finishes are consistent and are characterised by speckled worktops and flooring made out of concrete mixed with carbon residue and coal.

While providing space for visitors and employees to relax, the cafe and retail unit are deliberately positioned at opposite ends of the warehouse to encourage visitors to observe the production process, "raise their awareness of air pollution and invite visitors to take part in the fight against carbon".

"Through this purification process, a bubble of clean air is generated for the residents and workers in and around the industrial area of Cody Dock, reducing the severe health risks that are associated with the effects of air pollution," concluded Adaimi.

"Ultimately, purifying London's air quality and the lifespan of the people that live within it."