Stinessen Arkitektur has built three cabins and a sauna on an island in the remote Steigen Archipelago off the coast of Norway in the arctic circle.

Called Manshausen 2.0, the project is an extension of the Manshausen Island Resort, an eco-retreat founded by Børge Ousland, the Norwegian polar explorer who was the first person to cross the Arctic solo.

In total the resort encompasses seven cabins with a sauna, and a restaurant and library in a converted farmhouse that dates from the 18th century. The island was once a trading post for the fishing community, and the original cabins are located on the stone quays.

The three new cabins are perched on a rocky outcrop on the northern edge of the island, looking out over the Barents Sea. The project has been longlisted for a 2019 Dezeen Award.

Stinessen Arkitektur placed each new cabin carefully, taking into account wave height in both normal and extreme weather conditions, and the projected rise in sea level due to climate change. The three cabins are also staggered so they don't overlook each other.

Aluminium sheet cladding protects the solid wood structure from saltwater exposure. Cross-laminated timber was chosen for the frame as a sustainable building material.

Guests enter the cabins via a deck perched on the rocky outcrop, and the cabin floor gently slopes up towards the other end, which levels out as a viewing platform with floor-to-ceiling glazing on three sides. 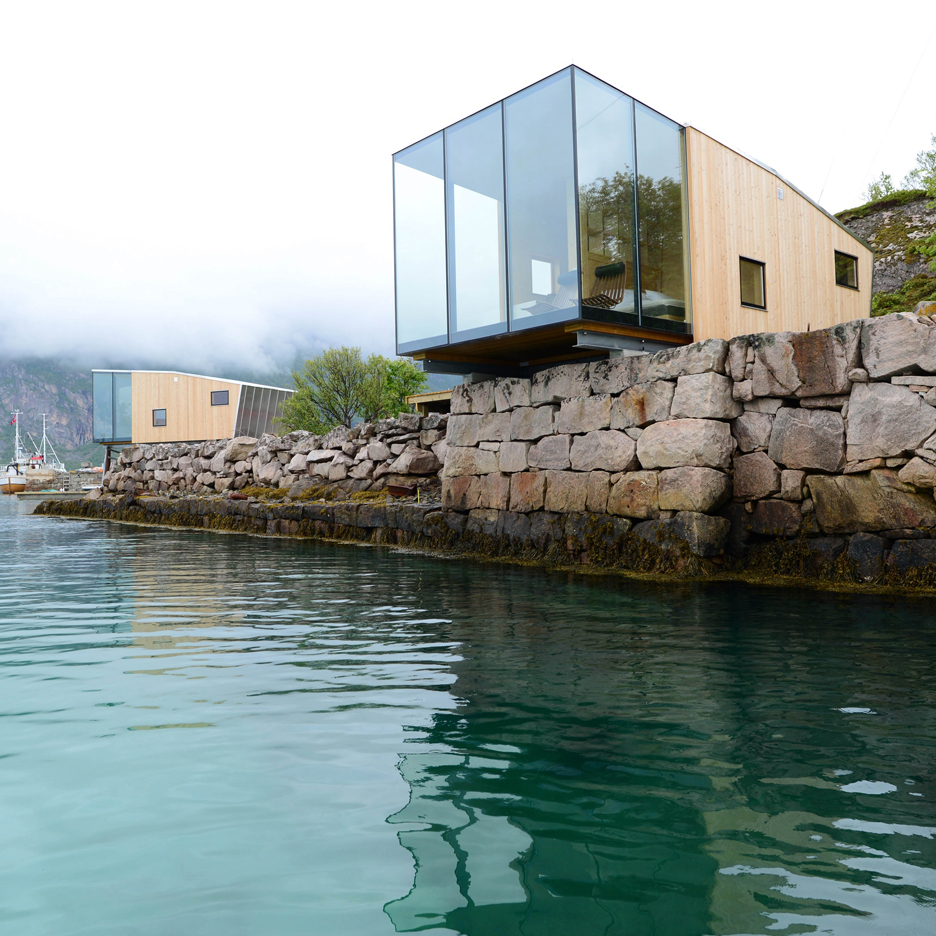 The cabins can accommodate two to four people, with a kitchen and dining area and space for luggage. The master bed is placed in the main room, set slightly back from the glass so guests can feel sheltered in bed while looking out at the scenery.

Old slate rood tiles found on the island were used to build the sauna, along with leftover materials from the first stage of the resort-building process.

A saltwater pond was built in front of the sauna, so visitors have a place to take a bracingly cold plunge using it.

The island, which is home to the largest population of sea eagles in the world, is the first area in Norway to be certified plastic free by White Flag International.

The only energy on the island is from hydropower and most of the food is sourced locally or grown in the old farmhouse's kitchen garden.

Norwegian practice Stinessen Arkitektur was founded in 2013 by Snorre Stinessen. In 2016 the practice built the first four cabins at the resort, which are clad in timber, on the 22-hectare island.

Cabins on stilts cause less damage to the ground they are built on. Sigurd Larsen built raised cabins that wrap around tree trunks for a hotel in Denmark, and Espen Surnevik designed a cabin on slender stilts for a holiday home on the Stockholm archipelago.