Heiko Weissbach oversees a team of architects at the newly opened Berlin office of CF Møller Architects. He explains how he became head of the firm's latest studio for the Dezeen Jobs careers guide.

Weissbach is responsible for overseeing a team of architects and designers at the CF Møller Architects Berlin studio. He acts as the main point of contact between clients, local planning partners and the firm's other international offices.

The German architect, who was educated in Denmark, saw an opportunity to combine his geographical knowledge and architecture expertise when CF Møller Architects opened its Berlin office.

"The occasion to bring together my German and Danish background, as well as my international experience in general in the role of head of branch, seemed like a perfect match for both CF Møller and myself," he explained.

To establish the studio in Berlin, Weissbach sourced a building in the Kreuzberg district as well as staff for the new office.

"Planning architecture in Germany differs quite a bit from the Scandinavian or British market," he revealed, adding they would ideally look to employ candidates for the Berlin branch that had "solid planning experience in the German market". 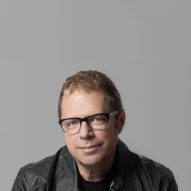 Weissbach began his design journey at the Royal Academy of Fine Arts in Copenhagen, where he studied interior design. During this period, he attended a lecture based on architecture, that inspired him to explore the practice further.

He continued on to the Aarhus School of Architecture, undertaking a two-year stint at Städelschule in Frankfurt, before returning to Denmark to obtain his architectural qualifications.

He became an architect with the intention of creating architecture that helped people.

"It may sound self-evident but making a part of the world a better place has been a principal driving force since architectural school," he told Dezeen Jobs.

After working in Denmark, France and Germany he was self-employed for a period before he "changed side", and worked as a project manager for the Federal Foreign Office in Berlin.

During this time, he decided to write an architectural guide about the city of Aarhus in Denmark, which allowed him to reconnect with friends in the industry, and in turn lead him back to CF Møller.

Weissbach stated that he enjoys the "broad structure" and "little hierarchy" at CF Møller. He concludes the Danish architecture firm are a "value-based organisation where tradition and a common working method are essential".