In a bid to address the environmental impact of the fashion and textile industry, the Edinburgh College of Art MFA student looked to the Scottish shores for more sustainable materials.

Every element of Linington's Seaweed Girl clothing line is made using seaweed and wood – from the fibres and the dye they're coloured with to the bead-like embellishments.

SeaCell  – an Austrian-made fibre produced by embedding dried, crushed seaweed into cellulose fibres using nanotechnology –  acts as the base fabric for the collection.

These soft, silk-like seaweed fibres are produced using the Lyocell production method that breaks down hardwood into chips that are then fed into a digester that softens them into a pulp.

According to the company, the resulting textile is 100 per cent biodegradable and carbon-neutral.

The designer used the by-products of the seaweed harvesting process in an eco-resin to create coloured bead-like embellishments.

This not only contributed to her zero-waste production, but was also a way of showcasing the "amazing colours offered by seaweed", which include earthy shades of purple and sea green. 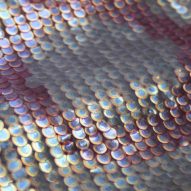 "I was keen to find a purpose for the seaweed dye by-product as it was important to me to create something that captures, preserves and celebrates the journey that the seaweed has been on," Linington told Dezeen.

She also produced a supple kelp sequin that boasts a leather-like feel, as a biodegradable, plastic-free alternative to the plastic sequins that are used extensively in the fashion industry.

Despite growing up near the coast, Linington told Dezeen how she always had a slight phobia of the marine plant.

It wasn't until around four years ago that she started to see the material in a new light, and was drawn to its colours and textures, and their potential as a textile.

As Linington then became more aware of the environmental effect of the fashion and textile industry, she started exploring seaweed as a more sustainable alternative to other "intrusive" materials used within the market.

"Over-frequent production of new styles and clothes have consequently led to the fashion and textile industry being one of the main contributors to the negative environmental impacts that we are tackling today," explained the designer.

"With the high demands and speed of the fashion industry, corners have been cut, resulting in garments lacking in quality, therefore shortening their lifespan and consequentially ending up in landfills," Linington continued.

"I believe that one way in which designers can tackle the anthropocene era is by re-thinking how excess and unwanted materials can be used within their work," she added.

The designer feels that a zero-waste approach should be an integral part of design in order to make any impact in the fashion industry, as well as creating quality items over quantity.

She thinks designers should look more towards their natural surroundings for raw and more environmentally friendly materials.

Linington's fashion collection was exhibited at New Designers – a show that sees students from more than 170 creative courses exhibit their work at the Business Design Centre in London for two weeks during June and July.

Also on display was a fire evacuation mask that allows additional time to evacuate a burning building, designed by University of Hertfordshire graduate Rimal Bhatt in the aftermath of the Grenfell Tower tragedy.