The first images of Kanye West's prototype housing for the homeless have been revealed, as the musician faces an order to tear down the structures following complaints over construction noise.

One photo, taken by tabloid news site TMZ, shows a series of incomplete structures at West's sprawling home in Calabasas Hills, California. Another set of images, published by Metro, captures the structures from the air.

The wooden lattice structures are prototypes of the prefabricated, affordable Yeezy Home units, which mark West's first foray into architecture.

West ordered to take prototypes down

TMZ snapped the housing as West encountered some problems in the construction of the prototypes on the site of the property he shares with reality star Kim Kardashian.

Attention was brought to the site when several of his neighbours complained to the Los Angeles County Department of Works about construction taking place late at night. 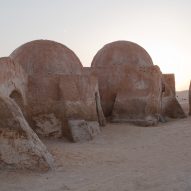 Kanye West is building Star Wars-themed housing for the homeless

West had claimed that the structures were temporary. However, inspectors found them built atop concrete foundations, which they said suggested otherwise.

This week, the musician was told to apply for a building permit. If this is not granted within 45 days, he will be forced to tear down the domes, according to the reports.

In an interview with Forbes, the hip-hop artist and producer revealed that the units are intended as low-income housing or accommodation for homeless people.

The domed structures takes cues from the houses on the fictional desert planet of Tatooine, the home of Luke and Anakin Skywalker in the Star Wars series.

Like the houses in the movies, West's structures are topped by circular openings to let light in.

Musician wants to use architecture to "make the world better"

The musician has been vocal about his passion for architecture for many years, telling students on a visit to Harvard Graduate School of Design in 2013 that "the world can be saved through design".

In 2018, he announced his plans to add the architecture arm, Yeezy Home, to his Yeezy label via Twitter in a bid to "make the world better".

Shortly afterwards, fashion designer Jalil Peraza revealed renders of prefabricated concrete affordable-housing for Yeezy Home on Instagram but the posts have since been deleted.