Called Dendê Duratex House, the 155-square-metre studio apartment is laid out as an open-plan L-shaped space. It comprises a bedroom at one end and a lounge at the other with a kitchen in between.

Off the sitting area is a larger living room, positioned next to a lush garden.

A free-standing lattice volume acts as a divider between different the kitchen and bedroom, and accommodates the kitchen cabinetry as well as a bathroom.

José created the one-bedroom apartment around the festival's theme, Planet Home. He took many cues from the Brazilian state Bahia, where he grew up.

Among these details is dark wood panelling that references Bahia's Jacaranda trees. Walls covered in burnt cement coating in a contrasting pale colour take cues the light and simple architecture of its beach houses.

"Every detail reflects a special bond with his homeland in a sober way, rich in art, bossa nova and poetry," said NJ+ studio in a project description.

Dendê, in name of the project, is also a reference to a fruit from a palm tree native to West of Africa that is commonly in northeast Brazilian cuisine, including Bahia.

Double-height glass walls line all three of the rooms, and bring in plenty of natural light.

At the entrance is a marble slab of rock salt with a 15-metre long strip of LED light underneath, which "recalls Bahian mysticism in a creative and subtle way". Another rock-like design runs along the bottom of the floor.

"Trying to convey an elegant and, at the same time, rustic essence, Nildo José conceived a house of clean architecture, abundant in straight lines, with punctual curves that make analogy to the Recôncavo of Bahia, a concave-shaped area of land around water in the region of Baía de Todos os Santos, or All Saints' Bay," the studio added. 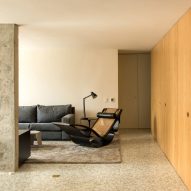 Five long bookshelves cover one wall and feature hundreds of clear glass bottles filled with Bahia's sand as an "analogy to the colonial past of the Recôncavo in a subtle way".  A white ladder is rested up against them, while a sculpture of a man is by Giovani Caramello is on the opposite end.

Dendê Duratex House features a large number of furnishings by Brazilian architects and designers, including a Bowl chair by modernist Lina Bo Bardi, an armchair by Jorge Zalszupin, and another seat by Zanine Caldas.

In the kitchen nearby are also a coffee table and chairs by Zalszupin, as well as an armchair in the bedroom.

The bedroom also features a white stool by Sergio Rodrigues, and a white chair by Marcenaria Baraúna and a custom-made wavy white headboard by NJ+.

The variety of pieces add form and texture to the home, yet when paired together create a cohesive and minimalist space.

"The house inspires a dreamlike nature through the abundance of pure textures, where the composition and combination of distinct elements impart a harmonious essence," said NJ+ studio.

Also in the living room is a sofa, a Construflama hanging white fireplace, rustic stones as coffee tables by Gustavo Neves executed by Mont Blanc and a two-arm wall lamp by French industrial designer Serge Mouille.

Cylindrical white stools in the kitchen are by Italian studio Decoma Design.

Other apartments in São Paulo include a renovated modernist flat by Saito Arquitetos and an abode by Pascali Semerdjian with a curved bookshelf.

Photography is by Denilson Machado of MCA Estúdio.