Children going to school or public places should be given bulletproof backpacks, the CEO of self-defence brand Guard Dog has told Dezeen.

Yasir Sheikh said parents should consider buying the products in the wake of the shootings in El Paso and Dayton last week, in which a total of 31 people died.

"We don't necessarily like when parents and children are thinking about carrying a bulletproof backpack after some tragedy, but safety now is part of the process of going to school or going to a public place," said Sheikh, who heads the Florida-based company that makes a range of protective backpacks called Proshield.

The products are advertised as being designed for a "student's everyday carry". They look like a regular backpack with a laptop sleeve and organisational pockets, yet provide protection from high-calibre weapons.

Guard Dog intends parents to purchase the bullet-resistant backpack for their children as a proactive preventative measure in light of the relaxed gun laws in the US.

"We encourage people to think proactively today," Sheikh told Dezeen. "We want them to think about safety and protection on a proactive level, not on a reactive level."

"Just like people would have home security systems for their house if there was a series of robberies, we also think people should start thinking about a bulletproof backpack if there is a series of shootings," Sheikh added. 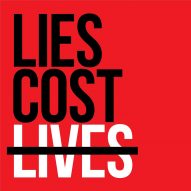 According to Sheikh, the backpacks protect against 9mm and .44 Magnum handguns – a similar level of protection than that worn by law enforcement officers in America.

They are made from polyethylene, a durable yet flexible plastic material with tightly woven fibres that can stop handgun bullets.

However they are unable to stop a high-velocity rifle, such as the AR-15 used by the Parkland High School shooter in February 2018.

Costing between $119.99 and $299.99, the bags are available in a bright pink or blue colour aimed at children, or come in darker, more neutral tones to cater to a wider age-range.

The Guard Bag backpacks have been on sale in selected Office Depot and OfficeMax stores since 2013, but Sheikh told Dezeen that some of the brand's retail partners had now started selling them nationwide.

The spotlight has been on gun laws in the US recently, with two mass shootings reported within 24 hours last week. An attack on a Walmart store in El Paso, Texas, left 20 dead, while nine died in a shooting in Dayton, Ohio.

The Proshield range is currently being advertised on the Guard Dog Security website as available to pre-order for 15 September 2019, when children return to school after the summer holidays.

The company states on its website that it is in partnership with non-profit organisation Make Our Schools Safe, and donates a percentage of every bulletproof backpack sale to achieving innovative ways to protect children.

As well as the backpacks, Guard Dog sells other personal security items such as pepper spray and stun guns.

Designer Yves Béhar also responded to a US mass-shooting in October last year with a graphic titled Lives Cost Lives, in the wake of the shooting at The Tree of Life synagogue in Pittsburgh.

The illustration was created as a warning against rising anti-semitism in the US, which the designer blamed on president Donald Trump's "current culture of lies".

Sandy Hook Elementary School in Connecticut, USA, where 26 children and adults were gunned down in a 2012 shooting, was recently rebuilt to incorporate a series of protective measures to prevent such a tragedy happening again.