Called Fungi Factory, the kit provides a use for the increasing number of coffee grounds that are currently discarded by UK households.

Rather than throwing coffee grounds away, users can repurpose them as a bed for growing oyster mushrooms in just four weeks.

"The concept helps to highlight possibilities of waste recycling within the home by bringing the often unseen, circular economy into the hands and control of people," said Pybus.

The system comprises four products, a storage container for grounds, a vessel for mixing the grounds with mycelium, a domed fruiting environment in which the mushrooms grow, and a grinder.

Loose coffee grounds are put into the storage container with mycelium spores. These spores germinate and starts the process of forming into mushrooms.

Coffee grounds are a good fertile medium for growing mushrooms and the kit offers an easy way to do this in a domestic environment.

"Shrinking space-intensive processes into a home-sized product is vital to the success of local manufacturing and food production," said Pybus. 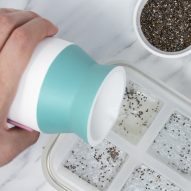 "I really wanted to create a system that was visually interesting and could get both adults and children interested in the product's function and potential benefits," added the designer.

"Fungi Factory is environmentally rewarding through its recycling, whilst providing an equally significant benefit to people's healthy eating habits."

By adjusting the carbon-dioxide levels inside the fruiting environment, the mushrooms can be kept healthy for up to three fruiting cycles. The output includes not just the oyster mushrooms, but also their stems – often called chog – that can be chopped down in the grinder to be formed into mushroom patties.

The leftover matured mycelium can be composted along with the coffee grounds after three rounds of growth. Users can also harvest and mould the mycelium to form into products.

London designers Sebastian Cox and Nir Meiri have both used mycelium as a material to make lampshades, with Meiri describing mycelium as "truly wondrous organisms with significant untapped potential".

Pybus and his fellow Northumbria students were tasked by Room Y – the innovation arm of British department store John Lewis – with coming up with novel ways to utilise untapped or neglected resources.

He identified that 95 million cups of coffee are drunk every day in the UK, with around 65 per cent of those consumed at home.

This leads to an enormous amount of waste coffee grounds, which retain up to 99 per cent of their original nutritional value after use.