German practice IFUB has completed a pair of timber homes in Munich that are subtly differentiated by the direction of their diagonal larch cladding and different coloured blinds.

The pair of adjoined homes have been built on the site of a former 1950s house that was in a state of disrepair. All that remains of this original home is well-known fox ornament that has been attached to the front of the house, and gives the homes their new name: Hausfuchs, or Fox House.

The houses that have been constructed with a timber frame and clad in diagonal larch cladding, were designed to have fit in with the existing suburban architecture, but also be unusual.

"True to the maxim one plot, two houses, four roofs, integration into the existing local architecture was achieved with the saddle roofs," said IFUB.

"By simply placing the houses transversely to the road, an exciting and unusual composition was achieved that clearly defines the approach to both properties."

While the frontage facing the street is flat, at the rear the houses and the garages have been staggered, allowing for more privacy and delineation between garden spaces. 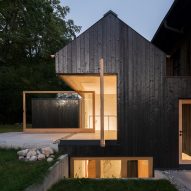 "Here, the optical effect of the diagonal wooden cladding is particularly beautiful," explained the architecture studio. "When viewed at an angle the surfaces appear to differ in tone, although the the slats, other than the opposing incline, are identical."

Almost identical from the outside, each home's interior layout has been tailored to its occupants.

Both are arranged around central staircases, but while the east house has a double-height second storey, the west house features a smaller, private loft space.

The ground floor of both homes is an open living, kitchen and dining space overlooking the gardens at the rear, with bedrooms located on the first floor.

"Various types of built-in storage were integrated into the stair element such as cupboards, shelves, the wardrobe, and parts of the kitchen," explained the architecture studio.

In the east house, the roof of its garage has been turned into additional storage space, accessible via the home's main staircase. Both also have large generous basement areas.

Previous projects by IFUB include the conversion of a former chocolate factory in Berlin into an office at ground floor level and an apartment beneath the vaulted ceiling above.

Photography is by Sorin Morar.