Norwich Cathedral in England has installed a helter skelter so visitors can get a better view of its vaulted nave before sliding down.

The 16.7-metre-high fairground ride has been positioned in the nave so that its 12-metre-high viewing platform offers a good view of the medieval cathedral's Gothic ceiling.

Once they have seen the ceiling, visitors can then ride down the slide that snakes around the outside of the tower.

This particular helter skelter was built in 1947 and has been rented from Chipperfield's Circus. It took two days to assemble its 1,000 parts in the nave of the cathedral. Rides cost £2, with the money going to cover the cost of the hire.

Reverend Canon Andy Byrant told the Guardian he got the idea while visiting the Sistine Chapel in Rome.

"I had the slightly risky thought of 'I know this is amazing, but actually the ceiling at Norwich Cathedral is every bit as wonderful'," he said.

"We have one of the greatest collections of medieval roof bosses anywhere in northern Europe. The trouble is they are so high up that most people never get a chance to really appreciate them."

The celing over Norwich Cathedral's nave is 21 metres high and dates from the 15th century. Its stone vaults are decorated with 1,000 carved, painted and gilded bosses depicting scenes from the bible. 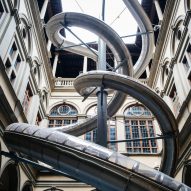 With the helter skelter in place people can view the ornamented ceiling better, but the temporary addition to the place of worship has not been well received by everyone.

The BBC reported that the former chaplain to the queen, Gavin Ashenden, has complained that Norwich Cathedral's clergy have made a "mistake" by putting the "naff" funfair ride in the place of worship.

"For such a place, steeped in mystery and marvel to buy in to sensory pleasure and distraction, is to poison the very medicine it offers the human soul," Ashenden said.

The helter skelter is part of Norwich Cathedral's Seeing It Differently campaign and will be in the nave until 18 August 2019.

Begun in 1096 and completed in 1145, much of the structure of the cathedral is in the Norman style, with later additions and repairs completed in the gothic perpendicular style. The flat timber ceiling of the nave was replaced with stone fan vaulting in the fifteenth and sixteenth centuries.

Artist Carsten Höller has also introduced a ride to a historic building, installing a double slide in the Palazzo Strozzi in Florence.

Photography is by Bill Smith.