Designers from the Interaction Research Studio at Goldsmiths, University of London, have produced a series of simple wildlife habitats that incorporate hidden cameras for capturing images of the animal visitors.

The habitats were designed by the team at the Interaction Research Studio to house its My Naturewatch wildlife camera, which can be built by novice naturalists using everyday materials and simple electronic components.

The installations, called Nature Scenes, will be presented as part of an exhibition called Brompton Biotopia taking place during the London Design Festival in September.

The exhibition will also include other examples of designers working on sustainable animal shelters.

A team from the south London institution originally developed the My Naturewatch camera to encourage users to document their neighbourhood's nature.

The project's website offers instructions on how to create the simple and affordable cameras, which can be positioned near food sources to capture wildlife feeding.

For the Brompton Biotopia exhibition, curated by Jane Withers Studio, the designers created a range of installations for attracting and photographing different species using cameras encased within fruits and vegetables.

These hybrid compositions will be positioned around the Brompton Design District during the festival.

Each of the habitats is made using natural components such as branches, coconut shells and stones. These are combined with recycled materials such as pieces of plastic bottles that are used to create a waterproof cover around the camera lens.

In addition to supporting the wildlife's needs, the installations have an educational purpose that informed their design language. The juxtaposition of natural and manmade materials, together with the use of geometric and organic shapes, highlights the complexity of the urban environment.

"From a human audience perspective, these spaces are small-scale 'sets' or 'still lifes' which acknowledge that the natural world and the human world are intertwined," said Interaction Research Studio designer, Dean Brown.

"Natural materials are interspersed with touches of the man-made, like machine-cut geometries and strong angular lines to emphasise the entanglement of humans and other animals in urban settings such as Brompton."

The installations can be hung from trees or concealed in undergrowth and the images they capture during the London Design Festival will be shared on the studio's website. 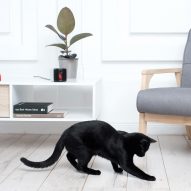 The designers want to use the project to highlight the problems faced by many urban species, which must overcome daily challenges associated with sourcing food and shelter.

Urban ecologist Dr Rob Francis of King's College London consulted on the project and provided advice about the relationship between city dwellers and the nature that surrounds them.

According to Francis, "cities are packed with nature – it's just not the type that people might expect, and can be harder to find and to appreciate".

The installations created by the Interaction Research Studio function as shelters, feeding stations and water points for various kinds of wildlife. Brown explained that they hope to observe birds, small mammals and insects interacting with the pieces.

"The capturing of footage enabled by the My Naturewatch cameras will allow our human audience to tune in to the intimate and often unseen lives of local wildlife," the designer explained.

"Seeing animals going about their daily lives, feeding, washing, resting, unencumbered by human presence creates a deeper sense of empathy for our local wildlife and a blurring of the boundaries between 'us' and 'them'," he added.

The Interaction Research Studio hopes the exhibition will encourage more people to consider building a My Naturewatch camera to use at home, or to create their own habitats using readily available materials.

Earlier this year, IKEA worked with UK artists and designers, including Adam Nathaniel Furman and Supermundane, to create a series of colourful animal habitats that repurposed the Swedish company's furniture.