Swiss running brand On has unveiled the Cloudrock Waterproof hiking shoe that is 35 per cent lighter than a regular boot.

Cloudrock Waterproof is the first hiking boot made by Swiss brand On, which is known for its lightweight running shoes and is reportedly the fastest growing running brand worldwide.

"Though road running is at the core of On, its expansion into trail running and hiking made perfect sense," explained David Allemann, co-founder of On.

"On's home in the Swiss Alps provides the perfect testing ground to inspire, create and deliver the best innovation in performance outdoor gear," he told Dezeen.

On was founded by Allemann, along with Olivier Bernhard and Caspar Coppetti in 2010, with the aim of creating  running shoes that were based on engineering principles.

"Our disappointment in the lack of innovation in running shoes led to a radical new approach: can the running shoe be redesigned with an engineering solution instead of material innovation?"

"The first prototype, an outsole with glued-on pieces of a cut-up garden hose, led to a major breakthrough – shoes as comfortable as a training shoe and as fast as a racing flat."

The brand has followed the same ethos to create the lightweight hiking boots.

According to On, the boot is 35 per cent lighter than rivals on the market and has "unparalleled grip for any and every terrain". 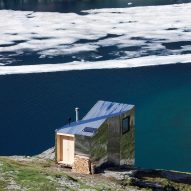 The boot utilises much of the same technology as On's shoes, including the CloudTec soles, which consist of a series of hollow rubber tubes based on the original garden-hose prototype.

The outsole technology is at the core of the brand and used on the majority of its shoes.

"The Cloudrock Waterproof utilises the CloudTec outsole technology that On is most known for, providing optimal support and cushion from start to finish, while still remaining exceptionally lightweight," said Allemann.

The upper parts of the boots are made from a durable membrane, which is wind- and waterproof and available in black sand-coloured and rust red. It also has a system, which means laces can be tied traditionally or with a single pull.

To mark the launch of the hiking boot On has created a reflective mountain hut almost 2,500 metres up in the Swiss Alps. The zero-impact cabin was designed to showcase the valley where On was first conceived.