Architecture studio Bo-Daa has designed Treehouse, a co-living complex in Seoul that is a stack of micro-apartments surrounding a planted atrium in a triangular concrete block.

The project, which has been longlisted for a 2019 Dezeen Award, includes 76 small studios and lofts, which all have access to the shared common areas and internal garden they face on to.

Bo-Daa designed the six-storey co-living space in one of Seoul's most expensive neighbourhoods for developers Kolon Global Common Life.

Treehouse's micro-apartments have different layouts on each floor, and come in three different sizes – 16.5, 23 and 33 square-metres.

Details such as built-in modular storage and magnetic wall-paint have been designed to make personalisation of the spaces quick and easy, whilst door numbers are discreetly hidden to underline the impression of communal space.

"Unit doors and numbers are tucked against concrete folds in the corridor, serving to melt indicators of private space into the collective," said the studio.

"Community is not forced but coaxed: each unit is designed for a single person with private bath and kitchenette, and residents only share amenities where larger scale and community make for a better experience."

To create a large, shared space for Treehouse, Bo-Daa split the triangular prism of the volume in two, cutting through its centre with a glazed atrium planted with large trees at the bottom.

"Stone paving and benches give the feeling of being outdoors," said the studio.

"The green atrium is lined with a workspace, hidden storage and shared amenities such as a laundry, kitchen and a pet garden, providing flexible ground for impromptu meetings or community events."

The floors become gradually slimmer as the building gets higher, in order to comply with the area's zoning rules. Most of the units give on to the northern aspect. 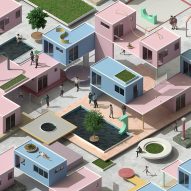 "Going against Korean convention, more units open to the north, which provides cooler and consistent light to the large slanted windows as well as a better view," explained the practice.

These three-metre-wide windows covering the northern facade have blinds that rise from the bottom upwards, providing privacy while still giving residents a view of the sky.

On the south side, a cut-out in the sloping profile of the building creates a roof terrace at fifth-floor level, providing a place to sit out in the sun.

Windows on the south facade help to create a stack effect to ventilate the central atrium, releasing any pent up hot air and drawing wind into the garden.

Bo-Daa is based in Seoul and was founded in 2016 by four young architects who met at the Yale School of Architecture.

Co-living projects are gaining in popularity all over the world due to ballooning rents, overcrowding and a change in lifestyles, with companies such as Norn creating a network of co-living spaces across Europe and north America.

In London, Opposite Office suggested redesigning Buckingham Palace – the residence of the royal family – to create the Affordable Palace where 50,000 British citizens would co-habit with the queen. Meanwhile, research by Studio Weave found that co-living could help solve issues of loneliness exacerbated by an ageing population in the UK.

Photography is by Rohspace, unless stated.