A tiered pocket-park tops this cafe in Kyushu, Japan, which Yabashi Architects has erected on the grounds of a building destroyed in an earthquake.

Host to a small cafe and an open-air social area, Omoken Park has been designed by locally based Yabashi Architects to be a "public space of private space" where locals can gather and interact.

It's set back from a parade of shops in Kumamoto, a city on Japan's westernmost island of Kyushu. The building that previously stood in its place was destroyed by a 7.0-magnitude earthquake that hit the city in 2016.

The tragic event is what encouraged the practice to create a community-focused project.

"Citizens who have experienced earthquakes have become aware of symbiosis more than ever by helping each other," explained the practice, which is lead by Tohru Yabashi.

The building's roof is composed of four wood-lined platforms that stagger up towards the rear of the site. This is meant to serve as a park-like space from which visitors can overlook passing crowds of shoppers or sit and catch-up with friends. 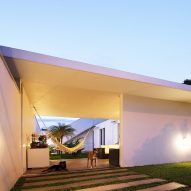 Access is made easy by a set of stairs that lead up from ground level directly to the park.

Greenery is provided by a handful of tall, leafy trees that have been dotted around the site's peripheries.

Inside is a small cafe that's almost entirely lined with cross-laminated timber (CLT), a warm contrast to the building's steel framework.

Wood has also been used to create the long service counter, stool seats and central dining table, which is illuminated by exposed-bulb pendant lamps suspended overhead.

Doors or partitions have been omitted on the front and back elevations of the building, allowing people to wander in from either direction off the street.

The practice is also hoping that the cafe's open facade will help flood its interiors with natural light, keeping power consumption to a minimum.

A couple of other architecture practices have opted to create green spaces on the roof of projects.

Earlier this year Estudio 41 added a lawn and flowering plants to the top of a tiny property in Brazil, while Vo Trong Nghia inserted a roof garden atop a family home in Vietnam's Ho Chi Minh City in a bid to bring its urban residents closer to nature.

Photography is by Yashiro Photo Office.